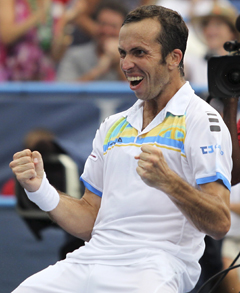 Radek Stepanek celebrates his victory at the Legg Mason Classic on Sunday. [REUTERS/YONHAP]

The 32-year-old Czech claimed his first ATP title in two and a half years and the fifth of his career, rushing the net to control the tempo and frustrate the fleet-footed Frenchman to claim the $264,000 top prize at the tune-up for the US Open.

“It’s a great satisfaction for me,” Stepanek said. “It’s great to still be able to compete with the young guns.”

Stepanek, the oldest player in the world’s top 100, became the ATP’s oldest champion since France’s Fabrice Santoro, who was 35 when he won at Newport, R.I. in 2008.

The Czech also jumped into the top 30 after starting the week ranked 54th by the ATP.

“We’re like wine. The older we are getting, the better we are,” Stepanek said. “Age doesn’t matter.”

“The speed is leaving slowly. We can’t compete with Mother Nature. But I’m working hard and it’s nice to see it paying off.”

Stepanek had lost five of seven prior matches to Monfils, including their most recent clash two weeks ago on clay in Hamburg. But he dominated his first final since last year at Brisbane for his first title since 2009.

“I still believe in myself,” Stepanek said. “That’s why the emotion was there, winning a big tournament at this stage of my career. It will give me a bit of confidence, a great boost for the rest of the summer.”

Seventh-ranked Monfils, in his first U.S. final and his first final of any kind since last year’s Paris Masters, fell to 3-11 in ATP title matches. He was bidding for his first outdoor hard court crown and his fourth career title.

“To be honest, I’m unlucky,” Monfils said of his finals failure rate.

Monfils, who never managed a break point against Stepanek, also said he was tired after his rain-hit semi-final finished only 14 hours before the final began.

Stepanek came to the net for 29 of his 57 points. While connecting on only 37 percent of his first serves, he won 90 percent of those points, including all 12 in the final set.