A woman’s value no longer tied to man

A woman’s value no longer tied to man 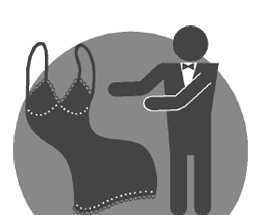 For a long time after Adam and Eve began wearing the first form of clothing, outer and undergarments were not separate. It was during the Middle Ages that undergarments were worn with a purpose, mainly to restrain a woman’s body. In the satirical fantasy “The Life of Gargantua and of Pantagruel,” 16th century French Renaissance writer Francois Rabelais said that when they leave home, they make sure to fasten a chastity belt on their wives. The only person who had the right to remove a woman’s chastity belt was her husband, who had the key.

The 20th century not only freed women from domestic roles but also made underwear a fashion item in its own right. Wealthy Korean women began to wear Western-style brassieres and panties. In the 1960s, underwear maker Vivian displayed mannequins wearing its lingerie, and pedestrians avoided the storefront to save themselves from embarrassment. According to “Oricom: Three Decades of Advertisement,” magazine ads for undergarments featured illustrations of women in underwear instead of models to observe the censorship standard of “respectable presentation.”

Real-life models began to appear in print ads and commercials in the 1980s, and most were foreigners because conservative Korean models were reluctant to pose in lingerie. Companies also preferred foreign models because they were viewed as voluptuous and exotic. In the mid-1990s, lingerie was emphasized as the item to wear to project a sexy image, and lingerie ads began to feature top Korean celebrities.

According to advertisement industry insiders, top stars are used as underwear models in hopes of encouraging customers to buy the lingerie so they can be like the celebrity wearing it. With that in mind, it was an unconventional decision for Vivian to name actor So Ji-seob as a model for its underwear. Daehong Communications, which has taken over the company’s ad campaign, seemed to be projecting the idea that women want to be loved by a man like So Ji-seob. Underwear ads used to focus on how women looked in lingerie, but now it seems that a woman’s choice in men is interpreted according to her taste in underwear.

French psychoanalyst Jacques Lacan once said that a woman looks at herself as another subject through a man, but things are different today. Now that the contemporary woman has a firm grip on her wallet, she should no longer see herself through the eyes of the men around her.

The writer is a culture and sports writer of the JoongAng Ilbo.