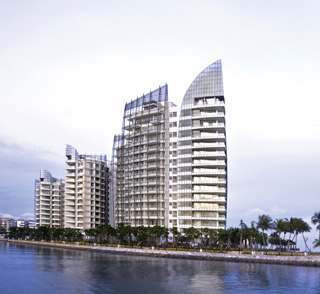 The BCA (Building & Construction Authority) Green Mark is an initiative to drive the construction industry towards more environment-friendly buildings. It was introduced by the Singapore government and has since been exported to seven countries including China and Saudi Arabia.

The Oceanfront Condominium was completed in March 2010 and was constructed in such a way so that the temperature inside would be maintained at 29~30 degrees centigrade without the use of a cooling system, which is 3~4 degrees below Singapore’s average sub-tropical temperatures. This means that in order to maintain a comfortable temperature only 80 percent of the energy is needed compared to most apartment buildings.

The Seoul State Tower Namsan Project, which was also constructed by Ssangyong E&C, received a LEED (Leadership in Energy and Environmental Design) Core & Shell Silver level precertificate in 2010 from the U.S Green Building Council and plans to maintain its standards in order to receive the full certificate.

In addition Ssangyong E&C is the industry leader when it comes to remodeling and has already successfully completed the remodeling of Singapore’s Raffles Hotel.

Through these projects, the company has not only improved living environment but has also resolved the issue of old apartments hindering views of the city.