Yeosu region asks for rail upgrade ahead of Expo

Yeosu region asks for rail upgrade ahead of Expo 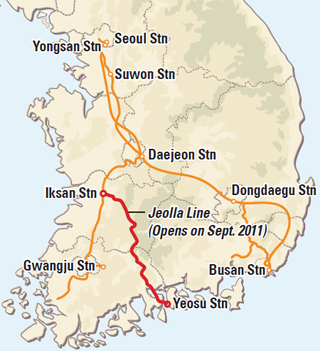 North and South Jeolla governments said they recently asked the central government to improve the KTX’s signaling and communications systems to increase the trains’ speed and reduce heavy traffic anticipated during the Yeosu Expo 2012.

The local governments and the Yeosu Expo Organizing Committee say that the rail service improvements could encourage visitors to use the KTX rather than taking buses or cars.

System improvements could increase train speed by about 80 kilometers per hour (50 miles per hour), decreasing the travel time between Seoul and Yeosu by more than 30 minutes.

The targeted section of rail is a 187.9-kilometer strip between Iksan and Yeosu. The project is estimated to cost 143 billion won ($132 million).

According to the Yeosu Expo Organizing Committee, more than 10 million people are expected to visit the city during the Expo and about 80 percent of them are likely to take express buses or their cars because of the slow speed of the KTX trains.

The core plan involves installing an automatic train protection system with electronic signaling devices between the two cities, which is expected to help engineers prevent collisions if a driver fails to observe a signal or speed restriction.

With the new systems installed, trains could reach speeds of up to 230 kilometers per hour, thereby shortening the travel time between Seoul and Yeosu to two hours and 50 minutes, the city of Yeosu said.

“Improving the signal systems is necessary to make the Expo a successful event,” said Choi Chang-ho, a Chonnam National University professor. “Because if the travel time is under three hours, visitors may be more inclined to take a train instead of driving, and it would also help prevent traffic jams.”