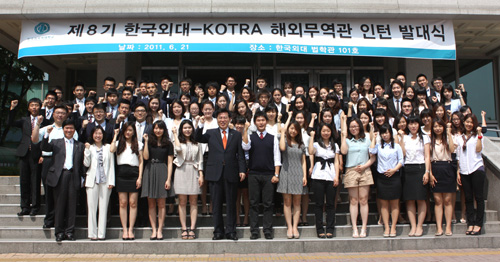 The welcoming ceremony of the internship program with Hankuk University of Foreign Studies and KOTRA Korea Business Center.

Hankuk University of Foreign Studies, with 32 majors teaching 45 languages, is one of the top three universities for foreign studies in the world. The University has set up a program called ‘7+1 program’ which intends to raise global leaders. The program aims to help students spend at least one semester out of eight at a foreign university to help develop an international mind-set. In 2007, the school set aside 400 scholarships for this purpose. The students were able to choose among almost any university in the world.

Hankuk University of Foreign Studies also has an internship program with the Ministry of Foreign Affairs and Trade and KOTRA. The program was launched in 2007 so students could gain valuable work experience at Korean embassies, international organizations and overseas trade offices.

Interns within diplomatic offices of the Ministry of Foreign Affairs and Trade are usually undergraduate students in their 3rd or 4th year or graduate students who are fluent in their major language. Since 2008 about 100 students have been sent in the offices per year for six months.

In addition, Hankuk University of Foreign Studies, as Korea’s No. 1 global university, has created the HUFS Global Volunteer group to help students understand and embrace the world and to realize the motto “Global Spirit of Excellence.”

On top of helping disabled and elderly people who live alone the Global Volunteer Group will also be starting educational programs such as teaching Korean language and taekwondo, and sharing different culture experience with other underdeveloped countries.

Not satisfied as just one of Korea’s top universities, Hankuk University of Foreign Studies is working hard to set up an infrastructure to establish relationships with other notable universities around the world so more students can go abroad and experience more. As of May 2011, there are exchange agreements with 397 universities and organizations from 76 countries.

The HUFS-UPEACE (UN-mandated University for Peace) dual-degree program that was set up for the first time in Asia is a program that allows students to receive master’s degrees from both Hankuk University of Foreign Studies’ Graduate School of International Areas Studies and UN-mandated University for Peace Graduate School, studying for a year in both Korea and Costa Rica. After graduating they apply to work at international organizations and international NGOs such as the UN to try and help expand world peace and reduce poverty.