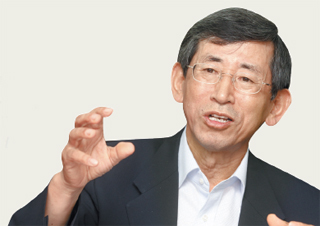 Last year, Korea’s 3,859 kilometers (2,398 miles) of highways were traversed 2.08 billion times. Except for 31 highways (280 kilometers) that were built with private funds, the rest were built by the Korea Expressway Corporation (KEC).

Founded in 1969, the KEC has overseen the development of Korea’s modern highways and roads for more than four decades. Over the years, the corporation has grown into a large public enterprise with assets of around 47 trillion won ($43.5 billion).

Leading this giant company is its newly appointed CEO Chang Seok-hyo. Chang has held positions in public office including at the Seoul Metropolitan Infrastructure Headquarters. In 2004, when then-Seoul Mayor Lee Myung-bak began the Cheonggye Stream renovation, Chang was the head of the project. Under the present administration, he was also the head of the Grand Canal Task Force, which aimed to build or expand canals throughout the peninsula.

The JoongAng Ilbo sat down with Chang, the KEC’s 15th CEO, earlier this month at his office in Seongnam, Gyeonggi.

Q. Around this time every year, complaints are made about the state of the country’s highway rest stops. What are your thoughts on this issue?

A. Highway rest stops across the country were built during the 1970s when the highways were constructed. Of course, these rest areas are going to lag behind in quality. Most people will feel as though they are stepping into a rural mom-and-pop store whenever they go to these places.

I think it is now time to upgrade these places to be more like hotels and department stores. There needs to be top-grade brand shops and franchises as well as better service. During my term, I plan to change these rest stops from being just a place providing snacks and restrooms to being one-stop leisure facilities.

If facilities are well-conceived, people will want to take a certain highway just to visit a particular rest stop. At present, there are 14 such rest stops around the country that were renovated to this standard, and until the end of this year, we plan to double the number of renovated rest stops in Korea. Also, by 2016, we plan to improve on rest stops further by including various leisure and cultural elements such as spa facilities and indoor golf courses.

What do you plan to do about illegal stall keepers at rest stops?

According to our internal investigation, there are 328 illegal stalls at Korea’s 164 highway rest areas. These stalls fill parking lots and we’ve had numerous complaints about them. In March, the KEC held negotiations with rest stops and stall keepers in which the stall keepers agreed to remove stalls from the areas. Instead, we’ve arranged for them to sell their goods legally inside the rest stops.

What are your plans for highway safety?

Around 60 percent of all highway car accidents are from sleep-driving. Currently, highway rest stops are built every 27 to 30 kilometers. So even if you are sleepy, you have to drive quite a bit to get to the nearest rest stop. To solve this, we plan to make 164 smaller rest stops by 2013 at which drivers can park their cars safely and take a nap.

There also needs to be more safety measures for tunnels and bridges in preparation for drastic climate change. We plan to improve upon the 53 highway areas where heavy snow has been a problem as well as 125 other highway areas where there have been frequent car accidents.


Some think the government is investing too much in highway development.

At 23 trillion won, the KEC’s debt is hefty, even for a public enterprise. Is there any way to lower this?

At this rate, by 2020 we predict that we will be 51 trillion won in debt. The KEC finances 50 percent of all highway construction and toll fees have been frozen for six years. Although we collect tolls, after paying maintenance and administrative expenses it is difficult for us to even pay the interest. This year, we expect another 200 billion won in debt. However, raising tolls is a complex, difficult problem because it is directly related to daily civilian life.

By improving highway rest stops and making more of them, we can increase revenue from store rental fees from 6 billion won at present to around 53 billion won by 2020. Also, this might be quite controversial, but we are planning to put more advertisements on highways. There are currently 811 electronic display boards near highways, and if we put ads along with traffic information, we will gain around 200 billion won per year.

The construction sector needs to venture overseas. In 2005, the KEC started an overseas business division. From then until present, we’ve secured 49 projects worth 8 billion won. In securing these projects, we need to rely on technology and quality.

You’ve been aggressive in promoting the Hi-pass toll system.

The distribution rate for Hi-pass is 51.6 percent, but we plan to raise it to 80 percent. To do this, I believe there needs to be 10 percent discount rates for Hi-pass users.

The KEC will be the first public firm to move to Gimcheon Innovation City, North Gyeongsang, this month. There are split opinions about this move.

It is already decided so I don’t have anything to add. I hope that the KEC will be able to play an important role in developing Gimcheon as a city that will lead Korea’s industry development.