Every abstract cloud has a silver lining, and hints of Duchamp

Every abstract cloud has a silver lining, and hints of Duchamp 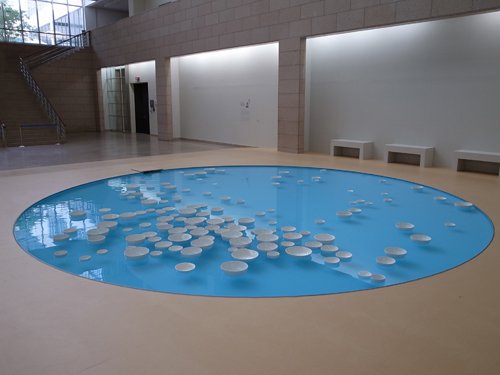 A circular pool with bowls floating on it that produce mystical-sounding music serves as one of the centerpieces of the “French Art Today” exhibition at the National Museum of Contemporary Art in Gwacheon, south of Seoul. The artwork, by Celeste Boursier-Mougenot, is named “Untitled”.

Contemporary art can be baffling at the best of times, as can French people, but this cannot be said of the “French Art Today: Marcel Duchamp Prize” exhibition in Gwacheon, Gyonggi, which is not only comprehensible but full of thought-provoking wit. 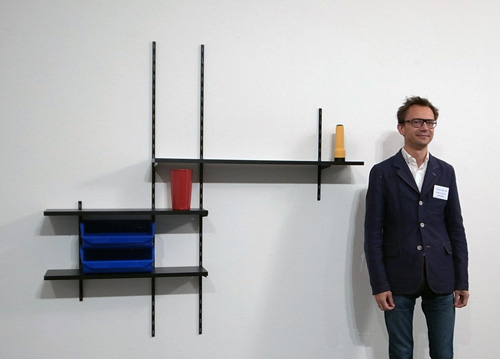 Mathieu Mercier stands beside one of his “Drum and Bass” series, based on reproductions of works by Dutch painter Piet Mondrian. By Moon So-young

Mathieu Mercier’s “Drum and Bass” will likely put a smile on many visitors’ faces at the show, which features 100 works by 16 French artists. It is being hosted by the National Museum of Contemporary Art (MOCA) south of Seoul and wraps up on Oct. 16. 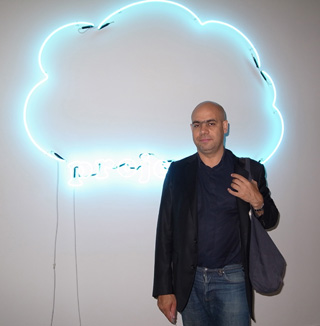 Laurent Grasso with his neon work. By Moon So-young

Mercier’s piece looks like a 3-D version of the late Dutch abstract painter Piet Mondrian’s famous “Composition” series. But it differentiates itself by adding plastic cups in strong primary colors and other objects that the artist collected randomly from supermarkets.

“This is a kind of combination of Mondrian and Duchamp,” Mercier said during a press preview at the museum last month.

Marcel Duchamp (1887-1968) made a name for himself in France’s avant-garde movement by introducing ready-made products to his works, based on the view that any object in the hands of an artist can be transformed into art.

“I’m interested in how the figurative things we encounter in everyday life can meet with abstract art.”

Most of the works in the show are related to everyday objects as the participating artists are winners of, or candidates for, the Marcel Duchamp Prize. This is sponsored by a group of French collectors called AIDAF. 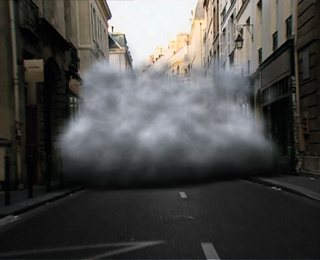 His installation work, “Untitled,” has porcelain bowls floating on a circular pool. The bowls continually nudge one another - courtesy of mild currents generated by a pump - to produce a mellifluous soundtrack.

“The pool in this exhibition is the biggest one I have ever made, so the resonance will be the biggest too,” the artist said.

Laurent Grasso brought one neon sign and three video works to Gwacheon. These highlight his interest in visualizing elements that are not normally visible to the human eye, such as microwave rays, electric energy and magnetic fields, according to MOCA.


His video work “Projection” depicts a cloud that appears on a Parisian street and charges toward the viewer along a narrow road before filling the whole screen.

“The title ‘projection’ has two meanings,” Grasso said. “First, the work is projected onto a screen. Second, it is the psychoanalytic term, ‘projection.’ You will come to project your own reality on the cloud .?.?. Art should be open in such a way.”

Meanwhile, sculptor and performer Philippe Ramette uses artificial limbs and harnesses to come up with unique photos that jar the viewer. One of these has him standing at a right angle to a tree trunk and was made possible by a special brace he created.

From these humorous works, “we can see the will to combine physical experimentation and a conceptual relationship with the world,” MOCA said.

However some artists are less interested in making visitors laugh, and more focused on showing the power that depersonalized objects can wield.

Such is the point of an aluminum sculpture by Xavier Veilhan in one room of the exhibition hall.

Such sculptures “are depersonalized but still have a certain presence,” Veilhan said a previous exhibition in Seoul.

Go to Seoul Grand Park Station on line No. 4 and take the free shuttle bus, which runs every 20 minutes, or walk about 15 to 20 minutes to the museum.