Defense a problem in Korea’s loss to Japan

Defense a problem in Korea’s loss to Japan 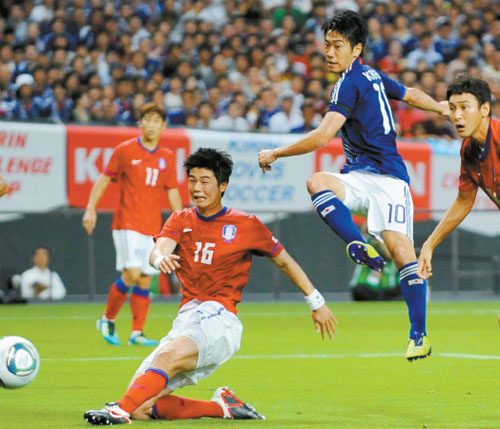 Japan’s Shinji Kagawa, second right, watches his shot as Korea’s Ki Sung-yueng tries to stop the ball during their friendly in Japan on Wednesday. [REUTERS/YONHAP]

At the Sapporo Dome, Shinji Kagawa scored two goals and Keisuke Honda another, as Japan toyed with the Korean defense for most of the match.

Korea still holds the edge over Japan, with 40 wins, 13 losses and 22 draws overall, but it was Korea’s first 3-0 loss to its archrival. It had three wins and two draws in five previous matches in Japan.

Kagawa opened the scoring in the 34th minute, capitalizing on sloppy Korean defending. Tadanari Lee set up Kagawa at point blank range after Yasuhito Endo stole the ball from the right wing. Kagawa then calmly put it past goalkeeper Jung Sung-ryong, with defender Lee Jung-soo unable to contain the Japanese forward.

Honda made it 2-0 in the 52nd minute when Hiroshi Kiyotake got control of a rebound after Jung made a tough save from a Yuichi Komano shot, he then set up Honda just inside the box to score.

Just two minutes later, Kagawa scored his second goal. As Japan broke away he redirected a nifty cross from Kiyotake that broke down the hapless Korean defense.

Japan almost made it 4-0 in the 70th minute, when defender Atsuto Uchida hit the post after splitting two Korean defenders on another break.

The Koreans didn’t really test Japanese goalkeeper Eiji Kawashima until midway through the second half.

Koo Ja-cheol had a couple of attempts. In the 71st minute, his header went just wide off the left-hand post. Four minutes later, Koo had a one-on-one chance against Kawashima, but put the ball well over the net with the Japanese keeper prone on the pitch.

This was Korea’s final friendly match before the third round of the regional qualification for the 2014 World Cup starts next month.

Korea is trying to reach its eighth straight World Cup and ninth overall.

Korea was missing some key offensive players, including Bolton Wanderers midfielder Lee Chung-yong, who broke his right leg after a bad tackle in a preseason game last month.

Son Heung-min, a 19-year-old midfielder for Hamburg SV in Germany’s Bundesliga, has had flu-like symptoms and was left off the team at the last minute.

Ji Dong-won, another young striker, is set to make his Premier League debut for Sunderland against Liverpool this weekend, and national team head coach Cho Kwang-rae let him stay in England to get ready.