U-20 falls to Spain in shootout

U-20 falls to Spain in shootout 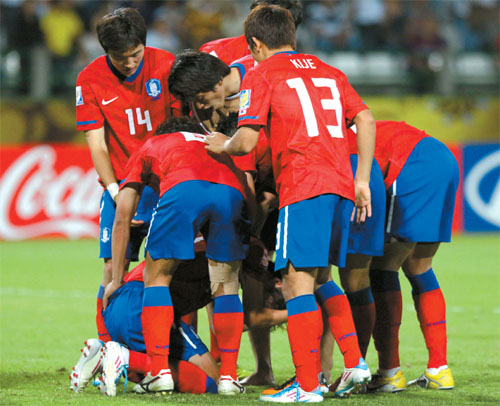 Korean players console one another after losing to Spain in a penalty shootout in their U-20 World Cup second-round football match in Manizales, Colombia, on Wednesday. The team beat Mali then lost to France and host Colombia before it was dished out of the tournament.[REUTERS/YONHAP]


While Korean football fans were no doubt shocked and disappointed with the senior football team’s humiliating 3-0 loss to Japan on Wednesday, they might have been able to catch a glimpse of a brighter future for Korean football yesterday, when the Under-20 team took a solid Spanish team to penalty shootout after playing to a 0-0 draw.

And what a shootout it was.

Korea ended up losing the penalty in heartbreaking fashion, 7-6, but the whole affair displayed the promise that the young Taegeuk Warriors have.

And head coach Lee Kwang-jong doesn’t see the match as a complete loss.

“We have no regrets in this match,” Lee said in a postgame interview. “I just want to say thank you to our players, who put in their full effort against a strong team.”

Korea and Spain both failed to score after regulation and extra time at the Estadio Palo Grande in Manizales, Colombia, and when Spain’s third kicker, Koke, shot one over the crossbar in the penalty shootout, Korea had an upset in mind.

But the hope was short-lived as Spanish goalkeeper Fernando Pacheco blocked a shot from Korea’s third kicker, Lee Ki-je.

The deadlock eventually came to an end when Korea’s eighth kicker, Kim Kyung-jung, fired the ball over the crossbar and handed Spain a 7-6 victory. The Korean U-20 team’s dream of reaching its second consecutive quarterfinals at the World Cup vanished.

But head coach Lee, 47, said he is proud of what his players did against tournament favorite Spain.

“In the penalty shootout, we were just unlucky. It’s not that we lacked practice or had less skill,” Lee said. “I think our players have shown they can match up with tournament favorite Spain and showed potential - they can also reach that world-class level.”

Korea was the underdog against the perennial contender from Europe, which topped Group C with three wins to reach round of 16.

Spain scored 11 goals and surrendered only two in the group qualifying round, which was the second best record among the 24 teams at the tournament.

But the Koreans managed to surprise Spain again and again with lightning speed and solid counterattacks, nearly ruining the young Spaniards’ dream of emulating their senior side, which won the World Cup last year.

After the Korean U-20 team was criticized for its lack of enthusiasm in attack in its 1-0 loss to Colombia last week, Lee moved right winger Baek Sung-dong to center and placed Moon Sang-yun on the right wing, while moving center attacking midfielder Yun Il-rok to the left flank.

It worked, until they had to win it in a shootout.

Several Korean players said they had a great experience and learned valuable lessons throughout the tournament.

“After the match, everyone consoled each other,” Baek said. “The result is somewhat disappointing, but we all have learned lot.”