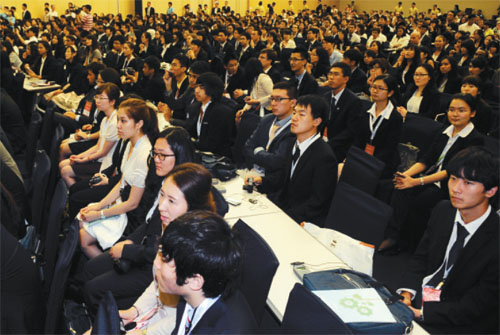 INCHEON - Sustainable energy was the theme of Thursday’s main session at the Global Model UN Conference in Incheon, a mock UN summit for students launched three years ago by UN Secretary-General Ban Ki-moon.

Some 150 students among the 646 college students from 61 different countries who are participating in a five-day forum at Songdo International Business District turned up in formal attire for the morning’s think tank session.

The students, who are being primed as potential future leaders in the political and business worlds, got to play diplomats for the third day of discussions and debates. Each one represented a nation and discussed their ideas on renewable energy and related issues. A total of nine questions were handed out to the “delegates,” who got to choose the ones closest to their hearts for discussion during the first 15-minute phase of the session. They could continue on the same topic in phase two or move on.

Tanzina Ahmed Choudhury from Bangladesh got the ball rolling in the guise of a Gabonese diplomat.

“But alternative technology is so expensive, the cost of building solar panels outweighs the benefit,” said Li. “It would take solar panels the size of a soccer field or larger to get just one liter of energy. So the efficiency of solar energy is pretty low.”

“Not all countries have all the resources you need for alternative energy. I went to an exhibition in the past and saw little toy cars that ran on solar energy. Developments don’t come from big things. They start from small things.”

As each delegate voiced their opinion, others jotted down notes and nodded. The group agreed that the key issue was not whether to adopt alternative energy, but how to make it technologically feasible and affordable.

Choudhury pointed out that the UN must take some initiatives to set a flat international rate for electricity, water and gas.

“In some countries, the electricity rate is so high that they tremble when they turn on the lights, while in other countries, the rate is subsidized, resulting in overuse,” said Choudhury.

“I know that this will take time, and it’s complicated, but a flat rate is necessary so that people who live in countries with expensive bills can live more comfortably, while people who live in areas where power use is subsidized can be guided to use less energy.”

Choudhury, one of the five students sponsored by the UN in New York for the Korea excursion, gave a glowing appraisal of the event when asked to review it.

“I’m really excited to meet a lot of international youth delegates here. We also have the chance to meet Ban Ki-moon, which is probably a once-in-a-lifetime opportunity for all of us,” said Choudhury. Choudhury said she hopes to become a UN official and that the mock conference was a “great opportunity to witness and learn what kind of procedures the real UN conferences take.”