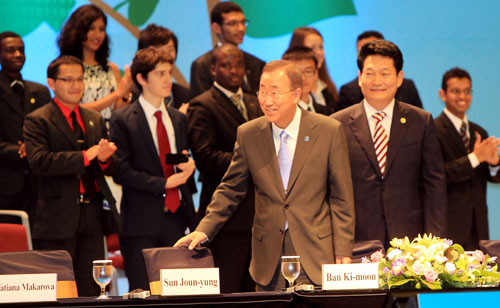 INCHEON - With the Kyoto Protocol due to expire next year and political will to tackle climate change and mitigate greenhouse gases lackluster, an ongoing forum to inspire the next generation of free thinkers to find viable solutions is being hailed as a great leap forward .

The five-day Global Model UN Conference Incheon 2011, which runs under the banner “Sustainable Development: Advancing Human Progress in Harmony with Nature,” aims to educate future leaders on dealing with environmental and energy issues.

The mock UN summit sees hundreds of college students from around the world engage in heated debate as they impersonate diplomats and practice working together to find answers.

It is seen as increasingly pertinent at a stage in history when China, India and Brazil are moving towards becoming economic dynamos, pouring more greenhouse gases into the atmosphere. Meanwhile Kyoto, the first and only agreement of scale on the fight against global warming, nears the end of its 14-year lifespan without significant consequence.

The UN-sponsored youth forum is a great way to telegraph these concerns to a wider audience while drawing in young people, said Kiyo Akasaka, UN’s under secretary general for communications and public information.

“Here in Incheon, young university students gather to discuss the issue [of global warming], and this encourages people to become more interested in the works of the UN,” Akasaka said.

“We need stronger support from the widest possible range of people, including young leaders.”

The conference, arranged by the UN, has attracted more than 640 college students from 61 countries, the biggest attendance for the annual event that was launched in 2009. The first edition in Geneva dealt with the Millennium Development Goals, and the second in Kuala Lumpur focused on cultural understanding.

Global leaders still have an opportunity to agree on the contested Kyoto Protocol before next year. They will meet in December at the 17th Conference of the Parties (COP) under the United Nations Framework Convention on Climate Change in Durban, South Africa. Another meeting, Rio+20, is scheduled to be held in the Brazilian city in June. But the world has yet to agree on how they should reduce their respective carbon footprints by mandate, thus lowering the chances of a substantial deal being made anytime soon.

Many of the students at this week’s mock conference proposed solutions to problems like these, with Tatiana Makarova, who was impersonating the UN secretary general, arguing that the event could raise awareness of useful ideas ahead of the Rio+20.

The students continued their debates in plenary and subcommittee sessions on Wednesday, with the results to be published today, along with those from their General Assembly sessions. A resolution is expected to be adopted on Sunday.

Akasaka, who was tasked with representing a member of the Japanese government, said it would be difficult for the students to come up with workable solutions.

Lee Dong-yeop, a sophomore at Seoul’s Kyung Hee University, assumed the presidency of the GMUN General Assembly. He said the global-warming debates may be fun and games now, but they could have positive ramifications further down the road if the students become global leaders and start to engage with the topic.

UN Secretary General Ban Ki-moon, who attended the event yesterday, said that if students took anything from the week’s program, it should be that joining hands to tackle major problems can bear much richer fruit than going it alone.

“Your experience in this conference will give you a full taste of the complexity of international relations, the intricacies of negotiating among diverse peoples and perspectives, the challenges of achieving consensus and the patience required to win progress,” Ban told the audience earlier in a keynote speech during the opening ceremony.

“I am sure you have all heard the saying, ‘United we stand, divided we fall.’ We must unite to overcome climate change, and create a greener, more sustainable world for all.”

The conference, the only one of its kind organized by the UN, has attempted to squeeze a year of UN sessions into the time frame of a single working week.

While this may be unrealistic, the atmosphere and decision-making process closely mimic that of real UN sessions, according to Maher Nasser, director of the UN’s Outreach Division Department of Public Information.

He said this would differentiate the event from the thousands of mock UN conferences held around the world that the UN does not have a hand in. It would also help students get a better feel for the inner mechanism of the world body, he added.

Korea is celebrating the 20th anniversary of its UN membership, and critics say it should contribute more in relation to its rising global status.

Incheon, a gateway to the country, has grown to be a major UN cluster with nine UN organizations settled in the city, including UNAPCICT and the Northeast Asian office of UN ESCAP. Another UN organization, the Asian Pacific center of UN CITRAL, is to open there in December. Incheon Mayor Song Young-gil said his city will become a permanent global town, where students from all over the world can interact with each other. He relayed the commitment of several foreign colleges to open campuses in Songdo, a new town where the GMUN is being held, from next year.