The true value of volunteer giving

The true value of volunteer giving 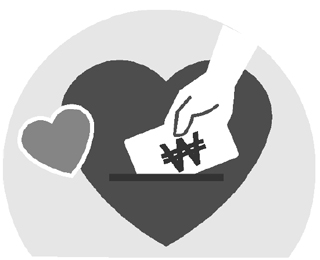 Koreans are known for their National Debt Repayment Movement in 1907, shortly before colonization. It was based on the idea that 20 million people could give up smoking for three months and save the money to help repay the country’s debt of 13 million won through individual donations.

Even after liberation, national fund-raising campaigns largely contributed to boosting the country’s poor finances. The South Korean destroyer Mount Baekdu, which won a battle against North Korean transportation vessels carrying special warfare units at the early stage of the Korean War, was purchased with public donations. Whenever a natural disaster strikes the country, the country engages in relief fund-raising.

But the people are not always generous, because they were forced to make donations during the military era. In 1986, students were assigned to give money to build the Peace Dam. The national defense fund-raising campaign in the 1970s were also somewhat forced.

President Lee Myung-bak also faced criticism by proposing a fund-raising campaign to restore Sungrye (Namdae) Gate when he was a president-elect in January 2008. He overlooked the fact that fund-raising is only meaningful when the public volunteers.

Finance Minister Bahk Jae-wan recently faced fierce criticism by proposing a nationwide fund-raising campaign to reimburse the victims of the savings bank crisis. He probably did so out of extreme frustration as politicians increasingly propose charitable compensation measures with state money. And yet, he was so wrong. We cannot have a nationwide donation campaign whenever there are fraud victims. The time has come for us to seriously think about what national fund-raising truly means.