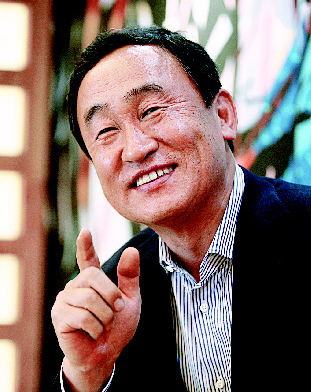 Kang Woo-hyon, CEO of Nami Island Inc., made an abrupt announcement Tuesday afternoon via telephone that he will step down by the end of this month, after 10 years.

Kang, who was named the company’s CEO in September 2001, said his next project will be to develop rivers, mountains and valleys into tourist attractions. These “rimovalleys,” a portmanteau of the words “river,” “mountain” and “valley,” will target a greater number of tourists, 3 million, than Nami Island, which has attracted more than 2 million tourists each year since 2006.

The island is perhaps best known internationally for Bae Yong-joon and Choi Ji-woo’s walk along its path of metasequoia and maidenhair trees in the drama “Winter Sonata” (2002).

When he became CEO 10 years ago, Kang’s monthly salary was just 100 won ($0.10). In return, he was given free rein to develop the island as he saw fit. The artist and graphic designer created a statue made of empty soju bottles, drove out merchants and offered temporary workers permanent employment.

In addition to his Nami Island responsibilities, he was also chairman of the Korea Ceramic Foundation.

Before he announced his resignation, Kang toured the country, from Jeju Island to Gangwon and Gyeonggi, in search of the site he hopes to turn into the next Nami Island, but said he “can’t reveal anything yet.”