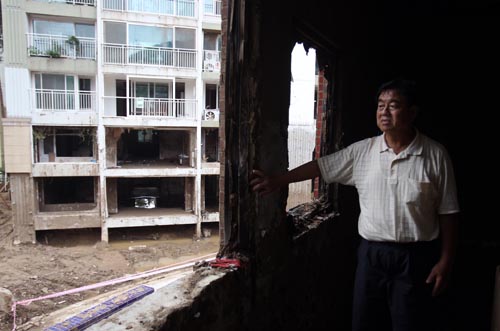 Inside the apartment complex unit where he last saw his wife before a wave of mud carried the elderly lady to her death near Mount Umyeon on July 27, Lee Wu-chun recounts his tragic story on Thursday. By Kim Tae-seong

The case of an elderly man who was not compensated after losing his wife and suffering severe injuries during a recent mudslide in Seoul has outraged the Korean public, who have set Twitter and Facebook accounts alight with calls for support.

The government usually awards those injured or killed by natural disasters between 5 million won ($4,600) and 10 million won if their case is endorsed by provincial governors and the area designated a special disaster zone.

But it refused to do so for 65 year-old Lee Wu-chun because he was not a tenant in the building where the accident occurred.

Lee, who now walks with a hobble and claims to have damaged vision, is not even permitted to attend compensation negotiations between authorities and locals because he is not registered in Seocho district.

“I’ve heard that residents in the Mount Umyeon area will be receiving compensation, but not me,” said Lee, who needs to take tranquilizers to sleep after living through a nightmare.

“When I asked the district office, they told me that I’m not eligible for any money even though I was injured in the landslide.”

Lee’s story triggered a public outcry as netizens asked why the government was not doing more to support a man who should have been enjoying what is normally considered retirement age in peace with his spouse, but for whom circumstance has compelled to keep working as a manual laborer.

He retired from a company that manufactures wallpaper around 2001. To make ends meet, he began his own shop, which provides wall-papering services, and was also supported by his children.

He is currently receiving no social security benefits as he did not join the state-run national pension scheme, which began in 1988 and expanded its number of policy-holders gradually through the 1990s.

Lee was papering the walls of a luxury apartment in Bangbae-dong on July 27 with spouse Lee Sook-je when a wall of mud engulfed the property, burying him and sweeping his wife out of the property that lies near Mount Umyeon.

The man, who had been hunting for business for some time, recalled hearing an earsplitting noise and seeing what looked like a huge shadow fill the room before everything went black, 30 minutes after the couple had begun work.

He awoke bleeding and submerged in sludge, and began digging the wet soil from his nose and mouth. After digging his way out of the apartment, he failed to find his wife and was taken to a nearby hospital. The last thing he remembers telling rescuers before collapsing unconscious was to make sure they found her.

In the afternoon, Lee’s son arrived at the scene and ventured into the building to search for his mother as rescuers and residents tried to block their passage, having deemed the premises unsafe.

The woman’s body was later found in a cargo yard some 20 meters from the luxury complex.

The son and his brother-in-law returned to the hospital with the corpse, whose eyes remained open due to the congealed mud.

Lee said he urged doctors to allow him to wash her face and hair and close her eyelids, despite the physical pain he was in, as a last measure of respect.

“It was the last thing I could do for my wife,” he said. “She was always more than happy to help me with my work, and she never complained about our never having any money.”

Lee buried his wife on July 29.