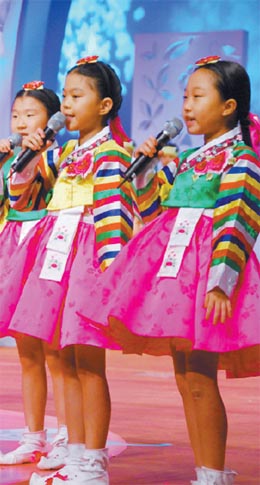 However popular K-pop gets, and whichever age group it appeals to, the new trend of having prepubescent kids turn up on reality shows mimicking the sensual moves of their favorite bands while singing about heartache tends to generate more opprobrium than applause.

So in a bid to put kids back in their rightful place, in the desexualized zone in which they more comfortably sit, the 25th Gugak Children’s Song Competition Festival is aiming to highlight the beauty and innocent appeal of traditional Korean children’s songs this Thursday at the National Gugak Center in Seoul’s Seocho District.

Gugak, as a term or genre, refers to songs containing child-like lyrics with traditional Korean rhythms. It keeps enough distance from the high-pitched tones of pansori, or Korean opera, to appeal to fans from all backgrounds but requires a basic melody created by traditional instruments. Instead of the way of counting rhythm that is used in the West, the songs follow a peculiarly Korean beat known as the jangdan. Jangdan rhythms are found in traditional court music, the jeongak songs listened to by the old literati, and gugak music. If the children’s songs lack any of these elements, they should have lyrics that focus on Korea’s history or culture.

“The festival is an attempt to make the children of today more familiar with traditional Korean culture, so we see music as a great bridge in this respect,” said Park Hui-jeong, one of the organizers. The festival is divided into two competition categories: song composition and singing. A total of 46 teams signed up for the preliminary competition in May, with eight advancing to the final of the song composition category and six for the singing category on Thursday.

“Even though people compose a wide variety of these kinds of songs, they are of little use unless kids actually sing them,” said Park. “That is why we have the singing category, to encourage more children and young students to come to grips with this genre of music and to enjoy singing it.” 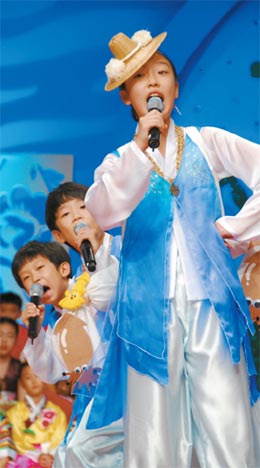 Children show off their dance routine as they compete in the singing category at last year’s competition. Provided by National Gugak Center

In a bid to further promote this old singing style, participants will be asked to pick from the amalgam of songs that have been entered in the festival over the last quarter of a century.

The festival has introduced 320 new gugak songs since it was established in 1987. Of these, 11 of the winners were included in Korea’s educational program for elementary school students from 2000. Songs include “Morning Sun,” “Song of Sparrow” and “Snowflakes.”

The competition usually runs before the Korean thanksgiving holiday of Chuseok, which this year falls in mid-September. The exact airing date for this year’s edition has yet to be announced by broadcaster KBS.

*The “2011 Gugak Children’s Song Competition Festival” will be held on Thursday in the main theater of the National Gugak Center in Seocho, southeastern Seoul.

The festival starts at 5 p.m. and admission is free. One hour prior to the festival, 500 seats will be handed out on a first-come-first-serve basis.

To get there, take exit 5 of Nambu Bus Terminal Station on line No. 3. For more information, see www.gugak.go.kr.