Images that moved the world at two shows in Seoul

Images that moved the world at two shows in Seoul 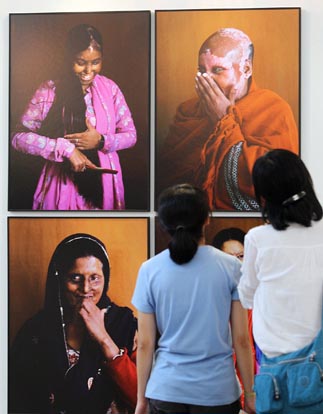 The shocking portrait of Bibi Aisha, an 18-year-old Afghan woman whose piercing gaze leaves an indelible mark on visitors as they try to mask the discomfort generated by her disfigured face, is perhaps the highlight of not one but two journalism exhibitions now showing in Seoul.

The young woman’s nose was sliced off on orders from a Taliban commander and this haunting image now stands as one of the centerpieces of the World Press Photo 2011 exhibition, which wraps up on Aug. 28 at the Seoul Arts Center’s V Gallery in southern Seoul.

The photo by South African Jodi Beiber was carried on the cover of Time magazine last August and was named World Press Photo of the Year.

It shows the brutality against women practiced by the Taliban, who punished the teenager for fleeing her husband’s house in Afghanistan where she was violently abused by her in-laws. She was later rescued and taken to a shelter in Kabul, where she received treatment and was subsequently taken to America for reconstructive surgery.

The second photo exhibition now running in Seoul, the Yonhap International Press Photo Awards or YIPPA, also attempts to attract visitors with dynamic images from around the world. It will run until Sept. 30 at Culture Station Seoul 284, the recently renovated building of the former Seoul Station.

World Press Photo 2011 arguably has the most prestigious works as it boasts 170 photos, including those by the 55 winners of this year’s World Press Photo Contest. These were whittled down from 108,059 pictures submitted to the 54th annual contest by 5,691 photographers from 125 countries.

The exhibition also shows the power of AP photographer Vincent Yu, who is based in Hong Kong. His contribution depicts North Korean leader Kim Jong-il attending a military parade with his youngest son and designated successor, Kim Jong-un, in Pyongyang last October. Until then, Kim Jong-un had rarely appeared in public or been photographed. 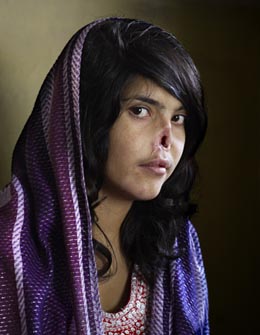 Bibi Aisha of Afghanistan in The World Press Photo of the Year, now on show at the Seoul Arts Center. Provided by the WPP

Meanwhile, YIPPA, hosted by Korea’s only English-language wire service, features more than 80 award-winning works by photojournalists and freelancers in 71 countries.

Their depictions of human suffering and environmental threats serve to highlight the UN’s eight Millennium Development Goals (MDGs), which include freeing people from extreme poverty and hunger, making primary education available to all and eradicating preventable diseases.

The exhibition displays the winning entries from last month’s competition, which received a total of 1,938 pieces, or 5,536 photographs.

“It is often said that a single photo can speak a thousand words,” UN Secretary General Ban Ki-moon said on Wednesday. “With more than 5,000 photo entries, I believe the message that today’s event is able to deliver on the MDGs is truly remarkable.”

The contest’s top prize went to Emilio Morenatti, a photojournalist for The AP, for his photos of cholera victims in Haiti last year.

Other winners included Alex Masi of Corbis; Nicolas Asfouri of Agence France-Presse and Cho Young-ho of The Hankook Ilbo. Among the most striking images were photos of a child laborer in a paint factory and people seal-hunting among Greenland’s melting glaciers.

The exhibit will also run from Aug. 22 to Sept. 9 in the visitor’s lobby of the UN Headquarters in New York and will tour seven major Korean cities starting later this month.

Yonhap News Agency said it plans to hold the exhibition biennially and donate the proceeds to UN funds for disaster and poverty relief and environmental protection.