Making the invisible visible, a brick at a time

Making the invisible visible, a brick at a time 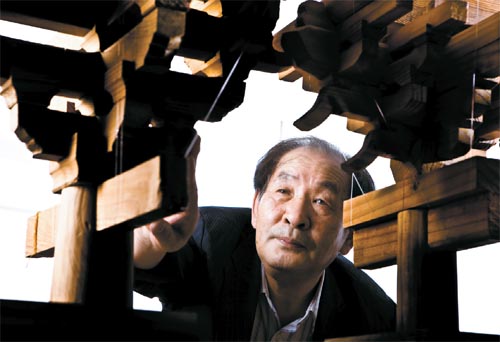 Yoon Hong-ro inspects a scale model of a traditional Korean building. Yoon, an expert in the field with 45 years of experience working on major restoration projects here, helped discover the Tomb of King Muryeong in 1971. By Kwon Hyeok-jae


It is difficult to find an old building in Korea these days that Yoon Hong-ro, an expert in traditional Korean architecture, has not had a hand in designing. The part-time professor at Myongji University has played a crucial role in preserving the country’s architectural heritage for the last 45 years.

Yoon began learning his trade in 1969 at the Nara National Research Institute for Cultural Properties in Japan under Kim Jung-gi, its first president. As he observed the Japanese restoring their ancient buildings, he decided that Korea’s method of replacing columns or other parts of buildings that had gone rotten could be improved. He studied the Japanese practice of simply removing the rotten part and decided to follow suit.

When Yoon returned home, he started importing timber as the government had banned people from cutting down trees as part of its then-green-minded policy. However, the imported wood was not sufficiently sturdy and was often riddled with harmful insects such as termites, as it was brought over from more tropical countries.

Yoon’s time in Japan taught him ways to circumvent problems like these among other more innovative restoration methods.


Q. You became famous in Korea for discovering the Tomb of King Muryeong of the Baekje Dynasty (18 BC to 660 AD) when you were working on another project in Gongju, South Chungcheong, in 1971. Can you tell us a bit of the back story behind this?

A. I was the field supervisor for some drainage repairs we were conducting near the site of the tomb. As we were doing some excavation work one day, I dug up a jeondol [black brick] and reported it to my supervisor. Shortly after that, Kim Won-ryong, then-president of the National Museum, turned up with a team of investigators. Kim was not sure exactly which era the artifacts we had found belonged to, so I leafed through a copy of my “Dongyang Yeonpyo” [a text featuring a chronological table of Korean, Japanese and Chinese history] and told him my opinion. He agreed with me and the real excavation work began.

The tomb also became famous for the haste with which it was excavated [it took a mere 17 hours and the findings were dumped in a single bag without careful examination]. Kim Won-ryong has already admitted several times that the excavation was done poorly, and I don’t want to talk anymore about that.

What I feel is most regrettable is that residential apartments and a police station were built in areas surrounding the tomb. This would never have happened in a city like London, where the authorities respect the basic principle of not only preserving historical sites, but also the surrounding scenery.

Korea’s Cultural Heritage Administration should take charge of managing cultural properties and the Ministry of Land, Transport and Maritime Affairs should enact a law or system that ensures the landscape around finds of this magnitude stays intact.

What other mistakes have been made in the last half a century regarding cultural preservation projects in Korea?

Some things could have been done differently with the Asan Hyeonchung Shrine Sanctuary Project, which former President Park Chung Hee started as a way to advance Korean culture. The shrine was originally located in some quiet countryside. However, what was once just a tiny shrine and a small house next to a ginko tree has now become a big tourist site, and I am not sure whether this is a good thing. Some Japanese umbrella pines were originally planted there, but we now know there are problems with sustaining these. The problem is that not enough studies had been done at the time on traditional landscaping, and people thought that good landscaping simply meant planting nice-looking flowers and trees.

Another example is what happened with one of the walls at Dosan Seowon, a school of Confucianism established by Lee Hwang during the Joseon Dynasty. The original toseokdam wall [made of sand and stone] was destroyed and replaced with one made of sagoiseok [a hexahedral stone].

Some people say traditional buildings should not be messed with. How do respond to this?

Bulguksa and Anapji, two historical sites of the Silla Dynasty in Gyeongju, North Gyeongsang, were restored in the 1970s. [Two gates of] Gyeongbok Palace were restored in their original locations in 1995, when the building used by Japan during its colonial rule was destroyed. If we don’t restore historical buildings, people have no connection to this kind of invisible history.