Mourinho refuses to be stifled despite UEFA ban

Mourinho refuses to be stifled despite UEFA ban 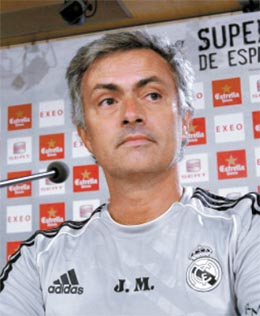 MADRID - Looking calm and unruffled, Jose Mourinho returned to face the Spanish media for the first time since April, when a famous outburst earned him a five-match sanction from UEFA.

And the Real Madrid coach had a clear message for all ahead of yesterday’s Spanish Super Cup first-leg match against Barcelona: “No one will shut me up.”

Saturday was the Portuguese coach’s first news conference in Spain since a 3-2 defeat to Zaragoza, which came after a 2-0 loss to Barcelona in the Champions League semifinals on April 27. Then, Mourinho went on a long-winded rant claiming that Barcelona’s recent successes were down to preferential treatment from referees and UEFA.

When asked what he had learned from the entire episode, Mourinho was clear again. “I learned you can’t tell the truth,” he said.

Mourinho refused to give his thoughts on Barcelona, including whether the three-time defending Spanish champs were among the all-time greats.

“I don’t talk about Barcelona. I only talk about my team,’’ Mourinho said at the Santiago Bernabeu, where the club said 57,000 fans came out to watch an open training session that took on more of a summer beach party atmosphere.

But that lighthearted mood did not carry over to the season’s first news conference.

While Mourinho looked as composed as ever, the season was already heating up courtesy of his choice of words. He would not be drawn on the two Champions League matches he still has to miss as part of his ban and refused to comment on whether winning a 10th European Cup for Madrid was the top priority this season.

But, he also celebrated UEFA’s reduction of his original ban, with two matches instead of one to be suspended for three years.

“I’ve had some important victories during my career, but for an organism like UEFA, which is not a normal or democratic organism, to reduce my sanction has tremendous significance,’’ he said.