For one pastor, a duty to save the abandoned

For one pastor, a duty to save the abandoned 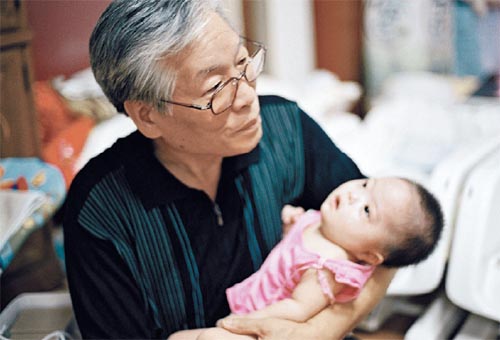 Pastor Lee Jong-rak, 57, holds a three-month-old baby girl named Eun-soo, who has Down syndrome, at his home in Nangok-dong, Seoul. The baby was abandoned by her father when his wife was sent to a psychiatric hospital due to shock from having given birth to a disabled daughter. By Yim Seung-hye


Pastor Lee Jong-rak, 57, keeps an ear out for the sound of a bell when he’s home.

The bell lets him know that someone outside has just opened the small hatch on the side of his cramped two-story home in the lower-middle class neighborhood of Nangok-dong in Seoul’s Gwanak District.

When Lee walks over to the hatch, opening it from inside his home, he finds a baby - abandoned by his or her mother and usually disabled.

Since December 2009, Lee has operated the hatch to discourage abortion and the abandonment of newborns with disabilities. Many disabled babies are found dead when abandoned by their parents.

Outside, a label on the hatch says “baby box.” A sign next to it reads, “Please do not abandon unwanted, disabled babies or babies who are a burden to single mothers. Please bring them here instead.”

Today, Lee and his wife - together with volunteers - look after 20 children in their cramped home. With not enough beds to go around, the children sleep on futons. Lee sleeps on the floor, sandwiched between two or three children along with his 25-year-old son, who has cerebral palsy.

Most of the children under Lee’s care, aged between three months and 17 years, suffer from severe illnesses and disabilities, ranging from Down syndrome to paralysis. Some of them are from struggling parents who ask Lee to take care of their children until they can regain their footing.

But Lee may have to surrender his hope of ridding society of abandoned children. His baby hatch, the country’s first and only anonymous safe haven for unwanted babies, has triggered a wave of criticism from many people.

Critics say the pastor encourages mothers to abandon their babies, regardless of his good intentions, by providing parents an easy way out by guaranteeing anonymity in a country where child abandonment is illegal. Children, they say, deserve to know who their biological parents are.

Some netizens who oppose Lee’s work have posted comments on his blog. “The proper and legal way to protect abandoned babies is to report the case to have them transferred to legal facilities,” one post read, arguing that “accepting an infant without going through proper verification steps is wrong as it would make it difficult for biological parents to look for their children or vice versa.”

Three months ago, five officials from the Gwanak District Office visited Lee’s home and requested the drop-off box to be taken down - saying that the hatch was encouraging child abandonment and that Lee’s home was too small to house the children. But when Lee refused to oblige, they came four more times and soon the request turned into intimidation, according to Lee.

“As far as I know, the Ministry of Health and Welfare requested the district office to visit my place and deal with it,” said Lee. “But I could never obey the order [to close the baby box] unless the government comes up with alternative measures to save the lives of these abandoned babies.”

Lee hopes the government will come up with appropriate measures and revise several bills to protect the lives of abandoned, disabled babies.

“I don’t want to operate the baby box either, but I have no choice as long as babies, especially with disabilities, get abandoned by heartless parents while there are no proper measures to take care of these infants,” Lee said. “I can’t obey the orders unless this country that encourages childbirth come up with proper policies to protect the ones that are already born but are abandoned.”

Making child abandonment illegal, Lee says, isn’t enough, but new legislation is needed to make it easier for single mothers or parents under difficult circumstances to send their children to adoption agencies.

“Young single mothers such as teenagers are tempted to abandon infants after secretly giving birth because adoption agencies don’t allow them to give up an infant unless both the biological mother and the father agree to give the child up,” said Lee. “But as most people know, boyfriends of these teenage single mothers tend to disappear. That’s why we frequently hear news of teenage girls abandoning their babies in public toilets or public garbage cans after giving birth.”

Lee recalls a newborn named Lee Han-na, whom he took care of for six years until she eventually died. Born with severe brain damage to a 14-year-old mother, doctors said that Han-na wouldn’t live for more than a couple of months. However, under Lee’s care, she lived six more years.

“Han-na was only 1.8 kilograms. Her brain was damaged, and she was completely paralyzed from head to toe as the 14-year-old mother drank and took drugs during her pregnancy,” Lee said. “Doctors told me that Han-na wouldn’t live long, but she lived six more years. Han-na, who could have died as an infant, deserved those six additional years.”

Although Lee installed the baby hatch in 2009 after reading about one in the Czech Republic, his heart for abandoned children goes back to 1998 when Lee and his wife decided to raise two abandoned children in their neighborhood who had disabilities just like their own son, Lee Eun-man, who was born with cerebral palsy.

“I can understand how devastated parents get upon giving birth to a baby so disfigured. I, too, wasn’t grateful for this baby boy and blamed God for giving me a baby with disabilities,” Lee said. “I couldn’t even tell my wife for a month, who looked so pleased to have given birth, that our son was so deformed and that the doctors only gave him a month to live.”

But Lee said he soon regretted those words. “I believe disabled people are so valuable. They can educate our society,” Lee said. “Taking care of the disabled, witnessing society’s efforts to make a better place for the disabled and living among the disabled, provides priceless opportunities to learn to be considerate, modest and caring.”

Lee pointed to his 25-year-old son, who has survived numerous operations and now lies on a bed in Lee’s home. Although his feet are deformed and legs are splayed at impossible angles, Lee says his son is what keeps him and his wife going.

In addition to being the biological father of two children, Lee has adopted two more children, Woo-ri, 9, and Sa-rang, 7. Lee is also a guardian for four more children.

Not all children who are left at Lee’s home are able to stay. Some are sent to other facilities after government officials said his four-bedroom home was too small to house even the current 20 who depend on Lee’s care. They also told him that his house was inappropriate for disabled children, with the stairs and doorsills of his home posing safety hazards.

So far, of the 32 total children Lee has taken in, three have died from illnesses and three have gone back to live with their parents. Five others have been adopted by other families.

When his daughter Sa-rang ran up to Lee during the interview saying, “Daddy, something’s wrong with Eun-man,” Lee jumped up and ran into the room with his wife, who overheard. When everything was sorted out, Lee came back and gave a sigh of relief.

“It’s a knee-jerk reaction for me and my wife to stop everything we do and run up to Eun-man if something strange is spotted,” said Lee. “The same anxiety applies not only to my own biological son, but to each and every one in this house.”

For Lee, it’s more than the lack of government support for abandoned disabled children that anguishes him. Seeing children hover between life and death upsets him, too.

“My heart breaks when children end up dying despite making every effort to save their lives,” Lee said.

During the interview with Lee, six-year-old Lee Pyeong-gang who was born without a right hand, ran into the room, shouting, “I’m home!” He clutched an ice-cream cone in his left hand, trying to peel off the packaging. He seemed to struggle but after a couple minutes, he finally had a lick.

“I try to treat them as normal children and make them do everything they can on their own rather than helping them out every time,” Lee said. “If I feel that my children are not being taken care of properly, as some people argue, I would be the first one to stop everything I do and send them away even before someone tells me.”

Lee admits that a bigger house is needed as the children grow older.

“I am looking for land to build a home that is bigger and more disabled-friendly or even considering renovating this place,” Lee said. “Many of the volunteers are fund-raising and making donations to protect this place.”

Lee supports the children in his home with a small government stipend as well as donations. When he was younger, he worked part-time in construction to make extra money.

Outside Lee’s home, above the hatch, is a verse from Psalms: “Though my father and mother forsake me, the Lord will receive me.” For Lee, caring for children is not a matter of choice, but a duty.