Korea to press on after Jones Cup loss

Korea to press on after Jones Cup loss 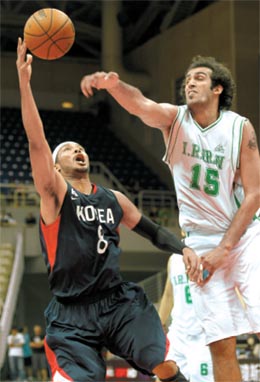 Moon Tae-jong, left, goes for a lay up against Iran39s Hamed Haddadi in the William Jones Cup final in Taiwan, Sunday. [YONHAP]

Led by head coach Hur Jae, Korea fell to Iran 66-59 to end runner-up at the invitational tournament. The team failed to grasp the title it clinched back in 1999, but Kim Dong-kwang, the executive director of operations for the Korean Basketball League (KBL), said that Hur’s team is on the right track to win the Asia Championship, which takes place from Sept. 15 to 25 in Wuhan, China.

“The future for the Asia Championship looks bright,” Kim told Yonhap News Agency. “We lost to Iran, but yesterday was just one of those days.”

Korea had already beaten Iran 77-59 in the qualifiers, which it topped with six wins and one loss, but in the final, the team could not contain Iranian center Hamed Haddadi, who plays for the Memphis Grizzlies in the National Basketball Association (NBA).

The 218-centimeter player collected 35 points, 18 rebounds and seven blocks against the Koreans to lead Iran to its third consecutive title in the Jones Cup.

Kim said Korea did not show its full potential, as it looks ahead to a berth at the 2012 London Olympics. The Asia Championship is a crucial stepping-stone to London as it offers the winner the sole ticket allocated for the Olympics to Asia.

“If we build up our team cohesion over the next month, we’ll be a different team than the one you saw two years ago,” Kim said.

In the 2009 tournament, Korea finished seventh for its worst recorded performance at the regional tournament. As the nation hasn't had a basketball team qualify for the Olympics since 1996, now is the time to step up a gear. Hur earlier described the Jones Cup as a “training session” for the Asian Championship. “Our goal in the Jones Cup was to train, but it’s a shame we couldn’t win it,” Hur said. “We will do better next month.”