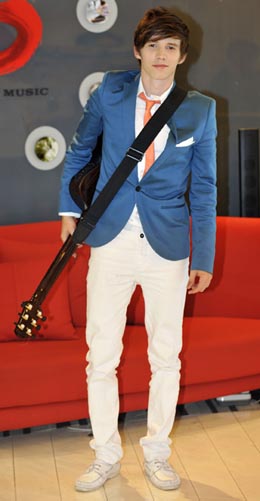 Joe Brooks, the 24-year-old British independent singer-songwriter who rose to fame on the U.K. MySpace charts, doesn’t want to be pigeonholed as a pretty boy who became successful based solely on his looks.

“I won’t lie. My look does bring a teen girl audience,” Brooks said at a press conference earlier this month. “But at the end of the day, music is what speaks. Music stands alone.”

Brooks was visiting Korea to appear at the 2011 Incheon Pentaport Rock Festival, a waterlogged event which ran from Aug. 5 to 7 and included other big names such as the Chemical Brothers.

The musician from Southampton, southern England, began teaching himself how to play the guitar at the age of 16. He was soon uploading videos of his songs on online social networks like MySpace, giving him a public audience and eschewing the normal format that artists rely on of piggybacking on a record label.

“At the time, the concept was very new ... that you could upload your music online and have people view it from Australia or other places. I soon found my fan base snowballing,” he said. The music video of his hit single, “Superman,” showed the potential of this new medium when it registered more than 5 million views on YouTube.


Q. You are here in the midst of a very packed schedule. How are you managing your time, and don’t you feel worn out?

A. No. I’m just having a blast. It’s really surreal to come to a place I have never been before. The reception was great. To have fans abroad, I must say that the power of the Internet is amazing. As for the showcase at C’Cloud [a performance center in Hapjeong, central Seoul], I hadn’t known about it until yesterday ... The venue was small, but packed. I am so fortunate to have the friendliest fans in the world.

What was your inspiration for making “Superman,” your debut single?

When I was in school, I was not the most popular kid. The song is about wanting to be popular, and getting the popular girl. I was 16 or 17 when I made it. It’s a cute teen love song.

You recently released your newest album, “A Reason To Swim.” What kind of message is your new album trying to convey?

The album concept is of “my reasoning to swimming.” Instead of sinking, that is. I believe there are many colors to it.

What do you think about social-commentary songs? Are you familiar with “Moon Shallow”?

Yes, “Moon Shallow” is the first song I learned to play on the guitar. It’s sweet. Social commentary is definitely something [worth doing]. It’s good to use the musical platform for the greater good.

We heard that you recently went on a trip with your father, and that you enjoy experiencing various cultures. Can you tell us about your trip to Africa? Do you usually get inspired by your travels?

In 2006, I went to Africa with my dad on a Habitat for Humanity trip. It was to a Tanzanian African village. This experience became the inspiration for the song “Broken Hands,” which was used in the show “Grey’s Anatomy.”

In Korea, pop music is attracting a larger following among the younger generation. Have you any advice for rising K-pop bands?

There’s a lot of young talent in Korea. Stick to your guns. Believe in yourself. Go for it. You have nothing to lose.

I’ve found it difficult to make goals, because if you make them in the too-distant future, you end up not reaching them anyway. And circumstances change, especially in this industry.