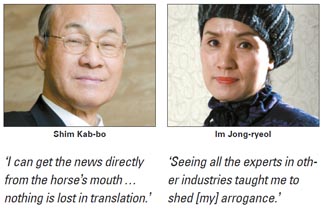 Breakfast meetings have proven to be such valuable sources of information gathering and networking for CEOs and corporate highfliers that many credit them with revolutionizing their businesses and management styles.

Shim Kab-bo, the 75-year-old vice president of Samick THK, has ranked as a devotee for almost four decades. He said the wisdom he stockpiled from listening to experts and interacting with his peers in other fields helped him transform Samick THK from a small labor-intensive business to an enterprise of middle standing specializing in industrial facilities automation.

“I think they are the best opportunity to absorb experts’ knowledge in a short amount of time,” said Shim. “Learning at these kinds of meetings is a lot better than getting information on the Internet, because I can get the news directly from the horse’s mouth. Listening to the experts directly also means nothing is lost in translation.”

He ranks as a regular at 10 breakfast meetings and turns up for at least three sessions a week, including events hosted by the Korea Human Development Institute and the Samsung Economy Development Institute. For him, the biggest headache is picking which ones to make time for given the wealth of choice.

“When they overlap, I compare the topics and lecturers and pick which one will be most helpful to me,” said Shim, who always faithfully records the lectures on his video camera. 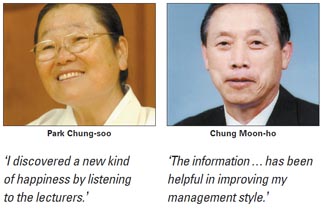 He now has 3,000 video files, which he often shares with his staff. He also edits the videos to use them in presentations when educating new recruits.

Shim has met Yoon Young-dal, the chairman of Crown & Haitai Confectionery Group; KBS President Sohn Byung-doo; and Her Tae-hak, the CEO of Samsung Petrochemical, among other prominent figures.

Chung Moon-ho, an advisor at Dongkuk Industry, is a regular at five breakfast meetings. He always make sure to turn up an hour early because of the useful conversations that naturally arise among the 70 or so participants while they are waiting for the event to begin.

“The information, knowledge and humor exchanged has been helpful in improving my management style,” said Chung.

“At lunchtime meetings, people talk about problems in their daily lives, mostly company-related. And in the evening, the discussions often revolve around memories from the past, such as people’s military service or their school years.

“But breakfast meetings are a different beast. People always discuss the future.”

Kim Suk-moon, the president of Shinil Pharm Glass, got hooked on breakfast meetings 20 years ago. Now rarely a week goes by where he doesn’t attend forums hosted by the three breakfast groups he is affiliated with.

He even encouraged his son and colleague Kim In-taek to start tagging along.

“Breakfast meetings help me keep pace with contemporary trends,” said Kim senior. “They have been incredibly helpful for me when making decisions regarding company management. I think they will also be great for my son.”

But it is not only businessmen who are finding their lives transformed by the experience.

Portrait painter Im Jong-ryeol has never missed a single session of any of the breakfast meeting groups she joined six years ago, she claims. She said she was “deeply impressed” by the discipline shown by visitors, and the self-management exercised by lecturers.

“I used to think I was quite successful in my field,” said Lim. “But seeing the experts in other industries taught me to shed that arrogance and be more humble.”

She said the experience has had a profound impact on her art.

“I used to paint lyrical themes, such as innocent children or beautiful ladies,” said Lim.

“But after meeting so many CEOs, I wanted to try and capture their charisma. So I began focusing on representing the passion people carry around inside them. Afterwards, I heard that my paintings had become much more fierce and expressive.”

“I always went to Seoul the day before the meeting in order not to be late,” Park said, adding that she got addicted to hearing the stories and advice of experts in various fields.

“As a preacher of Won-Buddhism, I have given sermons on my belief for 50 years,” she said.

“So I grew curious about what other people were thinking and saying. And I discovered a new kind of happiness by listening to the lecturers and following their advice.”