Brazil, Mexico in U-20 WC semis as Spain sent home

Brazil, Mexico in U-20 WC semis as Spain sent home 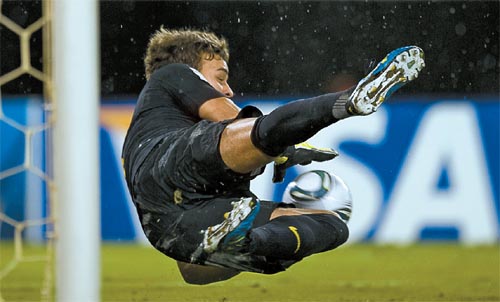 
MEDELLIN, Colombia - Brazil defeated Spain on penalties Sunday in a match that, despite being only a quarterfinal, will be viewed by many as the “real final” between the two best teams in the Under-20 World Cup.

In the end it came down to chance with Brazil winning 4-2 in the shootout after a 1-1 draw after 90 minutes and a 2-2 stalemate after 30 minutes of extra time.

In Sunday’s other semifinal, France defeated Nigeria 3-2 in extra time.

That sets up today’s semifinals with Brazil facing Mexico and France up against Portugal. The winners play for the title on Saturday in Bogota, Colombia. Brazil has won the title four times and Portugal has claimed two. Mexico and France will be trying to break through for their first.

Spain coach Julen Lopetegui made it clear he thought the better team lost. The Iberians led in possession, outshot Brazil 26-17 and won 12 corners to Brazil’s five.

“I feel very proud of these kids,” Lopetegui said. “I think overall they were better than Brazil and deserved to advance. Today, the best team in the World Cup is out.”

The two best teams in the competition thrilled the crowd with end-to-end football, possession passing and counterattacking to keep the other side off balance. Spain came back twice, and Brazil was rock solid to pull through on penalties.

“As we anticipated, it was a very difficult match against a very top team - strong and excellent,” Brazil coach Ney Franco said. “We had great penalty takers and a keeper who made the difference.”

Willian gave Brazil the lead in the 35th minute, before Rodrigo - who was born in Brazil - equalized for Spain in the 57th minute. Brazil again went ahead with Dudu's goal in extra time, but Spain answered two minutes later thanks to Alvaro Vazquez.

Vazquez is currently the tournament’s leading goal scorer with five.

Spain fell behind in the shootout when Jordi Amat’s shot was stopped by diving Brazil keeper Gabriel. Vazquez missed Spain’s fourth penalty when Gabriel kicked the shot away.

In the meantime, Brazil converted its four from Casemiro, Henrique, Danilo and Dudu.

Mexico, Brazil’s semifinal opponent, is on a roll and will have plenty of motivation against the young Samba Boys.

Mexico’s senior team won the regional Gold Cup title in June, defeating the United States 4-2, and added the Under-17 World Cup title in July, beating Uruguay 2-0 in the final at Aztec stadium in Mexico City.

Were it not for the drama of Brazil vs. Spain, France’s 3-2 win over Nigeria in extra time would have grabbed more headlines. Nigeria won its first four matches and was seen by many as a match for Brazil or Spain.

Level at 1-1 after 90 minutes, Gueida Fofana gave France a 2-1 lead in extra time and Alexandre Lacazette picked up his second goal of the match two minutes later to seal the win.

Maduabuchi Ejike scored his second goal in extra time to give Nigeria hope of a comeback, but the west Africans couldn’t find the net again.

France should have won the game during the 90 minutes, but Nigeria equalized in the final seconds of second-half stoppage time with a header from Ejike. Lacazette gave France the lead in the 50th minute with his first goal of the match.

This is the first time France has reached the semifinals of the Under-20 World Cup.

“This is the achievement of a new generation,” France coach Francis Smerecki said. “This showed when Nigeria tied the match. I think we can end up as champions, but we are aware there are some strong rivals.”

Nigeria came into the match having won its first four matches and was the highest scoring team in the tournament. But France managed to slow the Nigerian attack for most of the game.

The elimination is yet another disappointment for the Nigerians, who have finished second two times - in 1989 and 2005.

“It is sad to go out like this,” Nigeria coach John Obuh said.