‘National’ variety show is an illusion

‘National’ variety show is an illusion 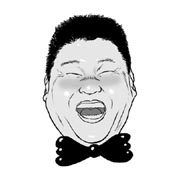 As a sign of affection and praise, the public likes to use “national” as modifier for certain celebrities. Cho Yong-pil is the “national singer,” while Ahn Seong-gi is the “national actor.” Sometimes, we find family relationships from public figures. Actress Moon Geun-young and figure skater Kim Yuna are often called “national sisters.” The popular celebrity reality shows - “Infinite Challenge” and “1 Night, 2 Days” - are no exception. Both programs are respectively presented by “national hosts” Yu Jae-seok and Kang Ho-dong.

The use of “national” illustrates the group sentiment of Koreans who want to share a sense of unity through celebrities. We also like to feel that, as fans, we helped their careers. Fans support a new face with potential, and when the chosen entertainer becomes a star, fans find satisfaction. Viewers of “Infinite Challenge” and “1 Night, 2 Days” are proud that their support contributed to their success.

Korean celebrity reality shows are based on unscripted situations, but they also show the characteristics of sitcoms as their continuity builds personalities and relationships among the participants. Unlike sitcoms, however, these reality shows have no set ending. Unlike quiz programs and survival shows, the show does not end with a winner. And as seasonal contracts are uncommon in entertainment shows, the life of a program is extended without any set rules.

Recently, Kang Ho-dong made headlines by expressing his intention to leave “1 Night, 2 Days.” Viewers concerned with the future of the program have started a petition drive opposing his departure. In media theory, the fastest way to attract viewers to television reality shows is to create a pseudo-family psychology. Fans may not have ever met the six men who go on an overnight trip, but they know - or believe to know - their brotherhood and care about the future of the program. Some even criticize Kang for lacking a sense of responsibility as a “national host.”

However, Park Ji-sung, a Manchester United midfielder and the “national captain,” resigned from his leadership position on the national football team. Even “Country Diary,” a long-time “national drama,” had to end when its ratings became too low. How should we understand Kang’s choice to leave the show when he is still at the top? One thing is certain: unless the nation guarantees a television program for life, “national variety show” is only an illusion.