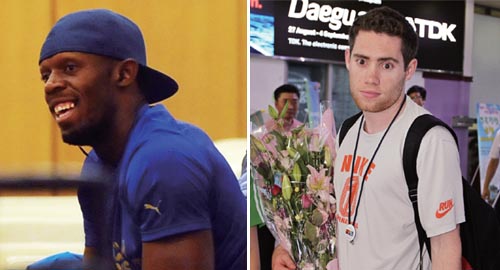 Left: “Fastest man on earth” Usain Bolt of Jamaica rests at Incheon International Airport following his arrival yesterday. The world record holder in 100- and 200-meter sprints will compete at the 2011 IAAF World Championships in Daegu. [NEWSIS]

Right: Jason Smyth of Ireland poses after arriving at the KTX East Daegu Station yesterday. Smyth is partially blind, but will compete in the 100-meter race in Daegu after clocking 10.22 seconds to qualify for B-Standard time. [YONHAP]