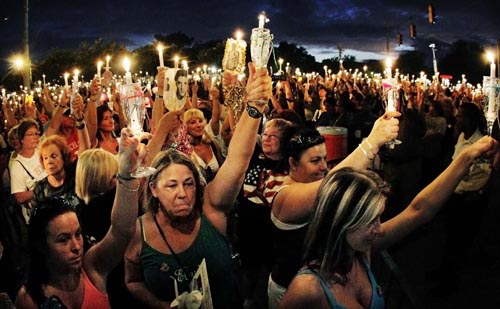 Elvis fans gather at Graceland for a candlelight vigil marking the 34th anniversary of Elvis Presley’s death on Monday in Memphis. [AP]


MEMPHIS - Silent mourners with heads bowed and candles in hand paid their respects to Elvis Presley at his grave at Graceland, his longtime Memphis home, on Monday night to remember the 34th anniversary of his sudden death.

Thousands of Elvis devotees walked in the humid night to the graves of Elvis and his relatives, some wiping away tears as they filed past. Flower arrangements and heart-shaped wreaths decorated the burial site as “If I Can Dream’’ and other songs played softly in the background.

The vigil was scheduled to extend to Tuesday morning, marking the anniversary of the King’s death on Aug. 16, 1977. The vigil is the main draw of “Elvis Week,’’ and some waited for hours outside the stately mansion for the procession to start.

Paula Penna came with her family from Campinas, Brazil, for her sixth vigil. Penna, who met her Brazilian husband in an Elvis fan club, cried and hugged him, her sister and aunt after paying her respects.

She said Elvis songs have helped her family through good and bad. All four have Elvis tattoos.

“Elvis music keeps the family together,’’ said Penna, who also was born on Aug. 16 and celebrated her 27th birthday on Tuesday. “I promised to come every year to pay tribute to Elvis because he is very important to family life.’’

Fans like 60-year-old Joe Makowski - who claims he saw Elvis in concert 81 times - and his girlfriend, Pamela Hembree, were among the first in line but still waited for hours along Graceland’s outer brick wall. A New Jersey native who owns four of Elvis’ concert-worn scarves and has attended several vigils said it was time to introduce Hembree to the Elvis Week experience honoring the life and career of the rock ’n’ roll star.

“The biggest thing I get out of it is seeing the young fans that weren’t even born until years after he passed away,’’ he said. “He helped me break out of my shell because I was kind of a shy kid,’’ said Makowski, an actor who now lives in Palm Harbor, Florida.

Visitors came from Japan, England, Germany and other countries. Some wore full Elvis outfits, others just his trademark sunglasses or sideburns.

Patrick Lucas sported sideburns and a pompadour as he walked to the vigil with the rest of the Elvis Presley Fans of Alabama, a club he joined on the Internet. Hunter, 22, came from Ehlange-sur-Mess, Luxembourg, for the vigil. “I try to be like him, in the ways that he was nice to people and how he treated people,’’ Lucas said.