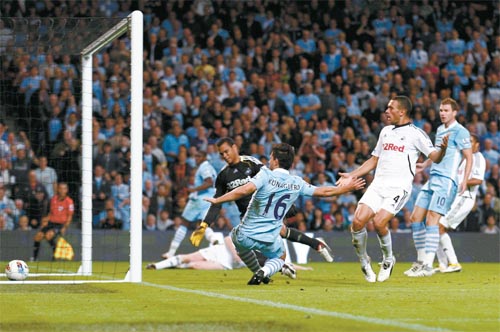 
MANCHESTER, England - Sergio Aguero scored two goals and set up another on his debut to help Manchester City beat Premier League newcomer Swansea City 4-0 Monday and give the Welsh club a harsh welcome to the top tier of English football.

The Argentina striker came on as a substitute and needed just 30 minutes to show why big-spending City made him its record signing for a reported 38 million pounds ($62 million) this offseason. After nearly scoring with his first touch, Aguero made it 2-0 in the 67th minute with an easy tap-in before launching a long-range strike that beat goalkeeper Michel Vorm in injury time.

In between, he provided a spectacular assist for David Silva for City’s third goal, chasing down his own chip over Vorm before it went over the touchline and kicking it back over his head for the Spaniard to slot into the net.

“He is a fantastic striker,’’ City Manager Roberto Mancini said. “He’s young, I think for us he will be a fantastic player in the future.’’

In contrast, Swansea’s own record signing Danny Graham - who cost less than a 10th of Aguero’s fee - was relatively anonymous on his debut.

Vorm had made a string of good saves to help Swansea withstand nearly an hour of relentless pressure from City before Edin Dzeko finally put City ahead in the 57th minute. The striker capitalized on Vorm’s first inaccuracy, slotting a rebound into the empty net after the goalkeeper failed control Adam Johnson’s shot from the right side of the area.

After that, it was all about Aguero. After replacing Nigel de Jong in the 62nd minute, the Argentine nearly scored the first time he touched the ball, receiving a pass at the edge of the area and turning deftly to fire a shot that forced Vorm into a diving save. The goalkeeper then reacted quickly to stop Toure’s close-range effort from the rebound.

But he was helpless when Aguero rushed into the left side of the area five minutes later and met Micah Richards’ cross at the far post to slot the ball into the empty net.

The former Atletico Madrid forward nearly scored again when he took a pass from Dzeko in the area but his chip over Vorm went wide and was heading over the line when Aguero chased it down and kicked it back over his head to Silva, who scored. The fourth goal was an individual effort from Aguero who received the ball about 30 yards from goal before setting himself and blasting a shot into the left side of the net.

“He showed his ability to be a world-class player,’’ Swansea Manager Brendan Rodgers said.

Silva had been City’s best players for the first 60 minutes and nearly scored twice in the first half, but was thwarted by Vorm and the crossbar. Together with Aguero, City may have one of the Premier League’s most potent attacking duos as the club tries to mold its many expensive signings into a championship-caliber team.

“They [speak] the same language. I think they are both fantastic players and they play football very, very well,’’ Mancini said.

While Swansea keeper Vorm impressed the Welsh team showed little, in the way of attack.