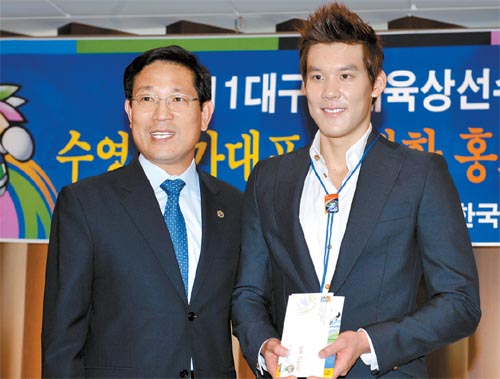 Swimmer Park Tae-hwan, right, poses with Park Sun-kyu, vice minister of culture, sports and tourism, after he was named an honorary ambassador for the IAAF Worlds in Daegu yesterday. [NEWSIS]


Just nine days from the start of the Athletics World Championships, the city of Daegu is getting into the groove as top athletes from around the world begin dribbling into the host city.

Australia was the first to arrive on Aug. 9, bringing with it two reigning world champs in the form of pole vaulter Steve Hooker and discus thrower Dani Samuels, but the atmosphere significantly heated up when sprint king Usain Bolt of Jamaica pitched up two days ago.

Bolt, the world record holder in the 100-meter and 200-meter sprint events, is by no means a shoe-in to defend his titles in Daegu as compatriot Asafa Powell looks sharp and hungry to reclaim the title of world’s fastest man.

Bolt, who sent electric shocks through the Bird’s Nest Olympic Stadium in Beijing three years ago, is now 25 and not as fast as he was when he set the Olympic and world records. But he has yet to talk to media since the Jamaican squad touched down in Korea and began training behind closed doors at Gyeongsan stadium in a neighboring city. The training sessions are expected to be open to the public on Monday. 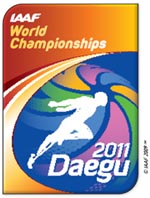 Meanwhile, Bolt is scheduled to attend a football event with Korean Olympic team head coach Hong Myung-bo on Saturday at a Hyundai department store in Daegu, one of several public events he has lined up before the sports meet begins on Aug. 27.

Bolt is a huge football fan and has said he would consider switching to the sport - or cricket - when he retires from athletics.

He will enter the athlete’s village on Tuesday and make public his tournament goal two days later.

Another 100m sprinter, Jason Smyth of Ireland, also arrived in Daegu on Tuesday. The 24-year-old, who is partially blind after inheriting a disease that affects his retina, won two golds in the 100m and 200m at the Beijing Paralympics in 2008. He advanced to the Worlds by clocking 10.22 seconds in May.

Smyth will join double-amputee runner Oscar Pistorius of South Africa as they compete with able-bodied sprinters in Daegu. Pistorius, 25, will compete in both the 400m and 4x400m relay. He is scheduled to be in Daegu early next week.

The U.S. team and its eight reigning world champions are due to finish arriving today, with Allyson Felix, a three-time winner in the 200m, and 100m runner Carmelita Jeter among those to watch.

The tournament’s organizing committee said that about 258 athletes will arrive in Daegu on Tuesday. It named Korean swimming star Park Tae-hwan, who won the 400m freestyle at the FINA World Championships in Shanghai last month, as an honorary ambassador.

“I will lend athletes my full support so they can have a great memory from day one of the games,” said the 22-year-old, who also won the 400m at the Beijing Games.

Park said it was regrettable that American sprinter Tyson Gay will miss the event due to a hip injury, but that Bolt’s presence was a plus.

“I hope many Koreans rise in athletics as well,” he added.

Park Sun-kyu, vice minister of culture, sports and tourism, said they should follow the swimmer’s lead. “I hope our athletes pull out some surprises like he did,” he said.