Protecting kids from the poverty stigma

Protecting kids from the poverty stigma 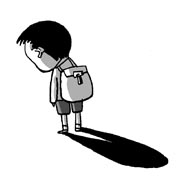 “Les Miserables” is a story of Jean Valjean, who is imprisoned for 19 years for stealing a loaf of bread. Upon his release from jail, society receives him with contempt. He changes his name and identity and succeeds in his new life, but the yoke of the past stubbornly continues to follow him. The general motif flowing through Victor Hugo’s classic novel is the concept of a “convict.” Hugo’s masterpiece demonstrates that once a person is labeled a criminal, he or she can almost never escape the stigma the label brings.

In the past, branding was a common practice that represented the boundaries of status and punishment. In Rome, aristocrats branded their slaves with a hot iron. In “The Scarlet Letter” by Nathaniel Hawthorne, Hester Prynne is jailed and then forced to wear a scarlet letter “A” after she is found guilty of adultery. Today, the use of physical branding is no longer widespread among humans, but stigma can still be a serious problem, even without the physical mark.

In Korea, children face the stigma of being poor, primarily in their interactions at school. At present, low-income families apply for tuition assistance by sending children to school with an application form containing information on their parents’ income that the children then hand in to their teachers. But a proposed law would eliminate this system and protect children from the potential discrimination it creates. If passed, the Elementary and Middle School Education Act would allow families to apply for assistance either online or by going to a local residents’ center. The bill was presented to the National Assembly in November 2010, but it still remains untouched.

Currently, the bill is caught in the debate over a program that would offer free lunches to all students. The opposition Democratic Party supports the program, while Seoul Mayor Oh Se-hoon wants free lunches provided only to students from low-income families. The DP has said that the mayor’s plan would further stigmatize underprivileged students and has accused him of using the long-stalled bill to persuade people to vote against the lunch program.

Poet Jeong Ho-seong once said that “scars are my teacher.” As time goes by, wounds heal and time may be the best medicine for them. But the scars of being stigmatized are almost indelible. The politicians may want to fight over the free school meal program, but it is more important to come up with a system that protects children from being stigmatized unfairly.