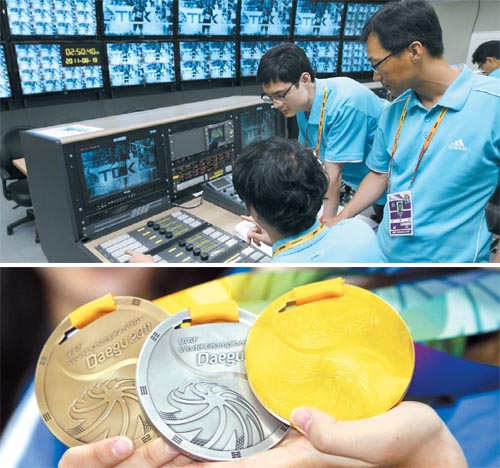 Just a few days before the start of the Athletics World Championships in Daegu, the brand new International Broadcasting Center (IBC) and Main Press Center (above) were shown to domestic and foreign press yesterday, with IBC officials checking equipment in the main control room. The centers, which will be responsible for all media related matters including broadcasting footage from the games, took five months and 3.3 billion won ($3.1 million) to complete. [YONHAP]

Medals that will be awarded to the top athletes at the IAAF Athletics World Championships are shown at the Daegu Stadium yesterday. The medals were made according to IAAF standards and are 10 centimeters (3.9 inches) in diameter, 6 millimeters thick and weigh 412 grams (14.5 ounces). They will be handed out during 49 awards ceremonies for game events. [YONHAP]