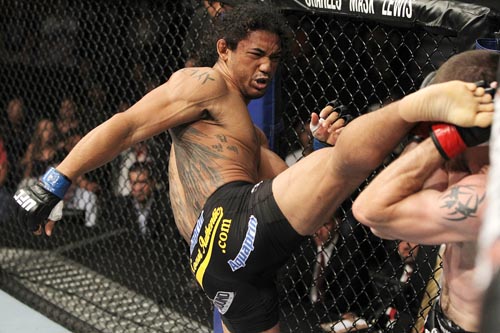 Ben Henderson delivers a swift kick to opponent Jim Miller at their Ultimate Fighting Championship match at the Bradley Center in Milwaukee, Wisconsin, on Aug. 14. Henderson won the match in a unanimous decision. Provided by Getty Images


Triumphant and covered in sweat, Ben “Smooth” Henderson stepped out of the ring on Sunday after winning his Ultimate Fighting Championship match at the Bradley Center in Milwaukee, Wisconsin.

His first act was to thank his mother in Korean and express his affection for his fans. That the match took place on Independence Day in Korea seemed to be part of the luck that was with him that day.

Henderson, a 28-year old mixed martial arts fighter, was born in Colorado Springs, Colorado, to a Korean mother and African-American father who met in Korea while his father was serving in the U.S. military. He got his start in martial arts when his mother put him and his older brother in taekwondo classes at an early age, and he earned a black belt before stopping in his early teens. He began wrestling during his middle and high school years in Federal Way, Washington, and finished second at the 2001 Mat Classic state wrestling championship at the Tacoma Dome.

He continued wrestling at Dana College in Nebraska, where he had a double major in criminal justice and sociology, and was named National Association of Intercollegiate Athletics All-American in 2005 and 2006. He went pro in 2006. In addition to his mixed martial arts titles, he is also a Brazilian jiu-jitsu brown belt.

The fight on Sunday (Monday in Korea) was fierce. Henderson’s opponent Jim Miller had racked up seven straight wins before losing to Henderson, who had made his UFC debut earlier this month. The judges gave Henderson a unanimous decision, simultaneously handing Miller his first loss in almost five years.

Before the match there was speculation that Miller, who was on a winning streak, would pound Henderson and then take his shot at the UFC Lightweight Championship. But Henderson put those expectations to rest with his strong performance.

Although Henderson has never been to Korea, he does have a following here, and for many of his fans, the young fighter draws the inevitable comparisons to Hines Ward, the 2006 Super Bowl MVP. Ward is also half-Korean and half-black and has become known for his work in Korea advocating for mixed-race kids.