At camp, youth try out reunification

At camp, youth try out reunification 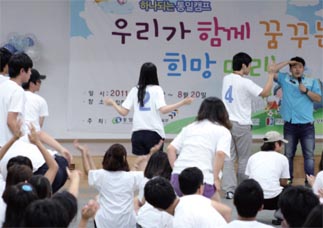 North and South Korean students come together on the first day of a “unification camp” at the National Youth Center of Korea on Thursday in Cheonan, South Chungcheong. Provided by the North Korean Refugees Foundation

CHEONAN, South Chungcheong - After 60 years of division, North and South Korea have become so different in culture and language that many would agree the two Koreas are like two different countries.

But on the second day of a camp to promote unification awareness yesterday, the difference was hard to tell by just looking at the young faces gleefully taking part in the activities.

The Unification Camp with students from both Koreas - those from the North are defectors - was hosted this week by the Ministry of Unification and the Ministry of Education, Science and Technology. It was an experiment: such an event has never been held before with students from both Koreas interacting directly with each other for three straight days in a row.

Students from ages 13 to 20 were taken to the National Youth Center of Korea in Cheonan in South Chungcheong from Thursday after being handpicked from schools by teachers who had received notification of the camp from foundations run by the ministries.

The Rainbow Youth Center under the Ministry of Family and Gender Equality was also involved in the program. The activities that took place this week on the sprawling grounds of the center provided a glimpse into what a unified Korea may look like in the future.

For three days, students were separated into ten groups and encouraged to come together as teams during various activities from singing, acting out short skits and even a visit to a nearby water park, which some had never seen before. Carrying a tune may have been difficult for some, but making new friends was accomplished with ease for all.

“I thought beforehand if the dialect [of other defector participants] wasn’t too obvious, they shouldn’t have trouble fitting in,” said a 20-year-old North Korean defector surnamed Paik who arrived in the South in June 2008. “And we’re all having a great time.” Paik is going to university next year and says he hasn’t had many problems adjusting to South Korean life.

In multi-colored fluorescent shorts and a haircut reminiscent of popular K-pop singers, Paik’s image wasn’t too far from his South Korean counterparts.

The same was true for another 20-year-old male defector, who proudly said he was probably the best at getting along with South Korean students both at school and at the camp.

“Most North Korean defector kids are usually shunned or get into a lot of fights at school,” he said, asking not to be named in print. “I think I’m the only [defector] who gets bowed to by other students at school.”

Previous exposure to South Korean culture in the North helped a great deal in adjusting for both defectors, who said getting access to South Korean media wasn’t hard to do.

“I used to listen to South Korean music and practice dancing to it,” the second defector said. He says he has been “crazy” about dancing all his life but wishes to go to medical school in two years.

Paik also watched Korean dramas and listened to South Korean radio programs when he lived close to the demilitarized zone in Hamhung.

Many of the South Korean students at the camp had never been in contact with North Korean defectors their age, and most of them said they had exercised caution when first interacting with the students from the North.

“I couldn’t even talk to them at first and was really careful to ask them anything,” said Woo Jeong-im, 18 who lives in North Chungcheong and has had an avid interest in unification from an early age because it was frequently discussed in her household. “But [the defectors] told us to ask them anything we liked, which was great.” Woo, twisting her hands shyly, said she wanted to keep in touch with her new friends after the camp finished.

Many students expressed hope for unification of the Korean Peninsula even if it takes time.

“I think it’ll happen by 2020,” said Paik, predicting it would come in the form of a rebellion against the Kim Jong-il regime.

Hong Ji-wung, a 19-year-old student from the South, said he didn’t feel an urgent need for unification “just yet” but expressed the need for preparation for future unification, which is exactly what the camp is trying to do.

“It is very important to help our children think about unification,” said Shim Yong-chang, education department manager for the North Korean Refugees Foundation, “and help them learn how to understand children from different backgrounds.”