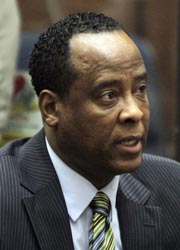 “There is reasonable expectation that Dr. Murray’s trial will be the most publicized in history,” wrote the doctor’s attorneys Edward Chernoff and Nareg Gourjian in court papers given to Judge Michael Pastor. “It is necessary to sequester the jury in order to ensure that it is free from outside influences and guarantee the defendant a fair trial by an impartial jury.”

Judge Pastor will review the request, and a hearing is set for Thursday.

In July, the judge said he did not support sequestering the jury. He estimated that the measure was unnecessary and said the system cannot afford the costs associated with isolating the jury for six weeks.

The defendant’s attorneys called it “Pollyanna to expect the jury members to go home each workday and weekend for six weeks and entirely avoid the mass of exposure this trial will engender.”

They added that isolation is the sole way to ensure the jury’s decision-making process is not tainted.

“Although there is a cost with ordering sequestration, it is comparatively minimal compared to the costs that would be incurred by a retrial or new trial that would be required as a result of contamination,” the attorneys wrote.

Jury selection is scheduled to begin Sept. 8, and opening statements will take place on Sept. 26.

Murray, the last doctor to treat Jackson, is on trial for involuntary homicide in the “King of Pop’s” death on June 25, 2009, at the age of 50 after an overdose of the anesthesia propofol, which the singer used as a sleeping aid.