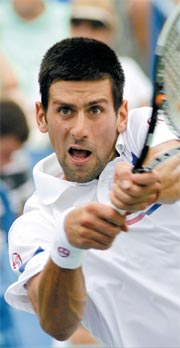 CINCINNATI, Ohio - World No. 1 Novak Djokovic will try to add another title to his stellar 2011 resume on Sunday when he takes on No. 4 Andy Murray for the ATP’s Cincinnati Masters crown.

Serbia’s Djokovic claimed his 57th match victory of the season - against just one defeat - with an abbreviated semifinal victory over Tomas Berdych.

He advanced after taking the first set 7-5 when the eighth-seeded Czech retired with a sore right shoulder.

On Sunday, Djokovic will be gunning for his 10th title of 2011 and sixth prestigious Masters title this season.

Murray, meanwhile, had to battle to hold off top American Mardy Fish 6-3, 7-6 (10/8) to give himself a shot at a second title this season, to go with his victory on the grass courts of the Queen’s Club in June.

Scotland’s Murray acknowledged that taking on the all-conquering Djokovic would be daunting, but said it would be just what he needs as he hones his game for the U.S. Open that starts on Aug. 29 in New York.

“I think it would be perfect preparation to play him before the U.S. Open, to see what I need to work on,” Murray said.

Djokovic needed no second-set dramatics - or any second set at all.

Berdych had said he wasn’t at full strength after hurting his shoulder in his quarterfinal upset of two-time defending champion Roger Federer.

He still managed to gain an early break and lead 5-4. But he was clearly fading as he dropped his serve with a double-fault to let Djokovic knot the set at 5-5, and after Djokovic broke him again to win the set Berdych called it a day.

Djokovic, who also played with tape on his right shoulder, called the abrupt ending “unfortunate.”

“I know he struggled a little bit with a shoulder injury. We have a similar thing, he just has a more serious injury,” the Serbian said. “I hope he recovers well for U.S. Open.

“Usually these things happen due to the tough schedule and every day playing under tough conditions.”

Even though he’s not feeling 100 percent himself, Djokovic was pleased to be in another title match.

“I’m in another final. It’s a great achievement,” he said. “Tomorrow I’ll try to get another title.”