Battle over lunches to climax Wednesday

Battle over lunches to climax Wednesday 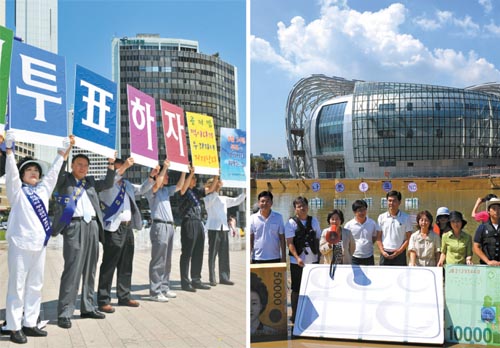 Left: A group pickets on Seoul Plaza yesterday to encourage citizens to cast their ballots. / Right: Civic activists against the referendum ask citizens not to vote on the lunch issue to make the exercise void. [NEWSIS]


The free school lunch battle in Seoul comes to a head this week after being fought vigorously by the ruling and opposition parties, and the outcome will be a bellwether of how other welfare issues - like cutting college tuitions - play out in the general election coming up in April and the presidential election in December 2012.

The issue will be decided in the first referendum ever held in Seoul, which takes place Wednesday from 6 a.m. to 8 p.m. at 2,206 polling stations. Voters will choose between two options: giving free lunches to all students in Seoul, or only to those from households below the average income level.

The referendum will be considered void if the turnout is less than a third of eligible voters, or 2,795,759 out of the total of 8,387,278. If more than a third vote, the option that gets a majority will be implemented.

About 100,000 voters already cast absentee ballots from Aug. 18 to 19. The result of the absentee votes will be announced Wednesday after added to the remaining votes.

War on a ‘populist’ program

In the past, children from poor families could apply for free lunches. But in December, the Seoul Metropolitan Council passed a bill providing free lunches for all students to be implemented in stages. The free lunch program was a campaign promise by opposition politicians in June 2010 local elections, including Kwak No-hyun, an opposition politician who became superintendent of the Seoul Education Office, and city council candidates.

The first students to get the free lunches were students from grades one to four, with a budget of 150 billion won ($138 million) from local district offices and the Seoul Education Office. The next stage is to give meals to students in grades five and six at some point in the future, which will cost about 69.5 billion won. It’s supposed to be extended to middle schools by 2014.

But Seoul Mayor Oh Se-hoon, a member of the ruling Grand National Party who was re-elected in June 2010, disagrees with the law and has tried to block its implementation. He argues that students from wealthy families don’t need the free meal and brands the law as “populism.” He also says the program will waste the city’s budget and will cost 400 billion won per year when all students through middle school are included.

Oh’s position is that the meals should be provided only to poorer students who need it.

The opposition-controlled city councilors argue that giving the meals is part of the mandatory education guaranteed by the Constitution, and say that if only poor students are offered free meals, they will feel stigmatized.

Oh tried to block the program by filing a lawsuit against the city council with the Supreme Court, which is pending. Then in January, Oh came up with the idea of a referendum on this issue. A conservative civic group called the National Anti-Populism Union collected some 810,000 signatures, meeting the legal requirement for a referendum.

According to the National Election Commission, there have been three referendums in Korea since 2004, when the nation adopted a referendum system for the first time. All of the previous three, held in Jeju Island, South Chungcheong and South Gyeongsang, received a turnout of more than 33.3 percent.

The pro-free lunch forces have tried to sabotage Oh’s referendum. Opposition party members carried out campaigns dubbed “The Movement Against a Bad Vote” and “Let’s Refuse a Vote That Divides Students into Poor and Rich Groups,” urging citizens not to cast their ballots in the referendum. The campaigns were historical: urging people not to vote isn’t a common sentiment in Korea.

Political analysts say the majority of people who will cast ballots Wednesday will probably support Mayor Oh and disagree with the free lunches. Citizens who like the free lunches will probably stay home to try to void the referendum entirely. The big question is whether enough people will turn out to make the vote valid.

Oh is obviously anxious about getting the 33.3 percent minimum turnout. The mandatory turnout, about 2.79 million, is more than the 2.08 million votes he received in his re-election last year. The fact that he spent about 18.2 billion won of the city’s budget on the referendum, despite the opposition’s fierce criticism, shows how much is at stake.

One of the criticisms was that Oh was acting undemocratically in calling the referendum: in effect, rejecting the will of the voters who elected the liberal city councilmen and education officials in June 2010.

On Aug. 15, Korea’s Independence Day, the 50-year-old mayor campaigned for votes personally, parading through central Seoul with a banner bearing the date of the referendum. He campaigned until Aug. 18, when the Seoul Metropolitan Election Commission told him to stop because his activities violated the election law, drawing protests from Oh’s supporters in conservative civic rights groups.

“I think the biggest worry in this referendum is the fact that the vote will be held on a weekday,” Oh said on a CBS radio program Aug. 19. “I’m worried that citizens leading their daily lives won’t have time to go to polling stations.”

To counter speculation that he was using the referendum to build a candidacy for next year’s presidential election, Oh said Aug. 12 that he will sit out next year’s election. And yesterday, he declared he would take “full responsibility” - presumably step down as mayor - if he loses the referendum.

A rift in the GNP

The ruling Grand National Party, to which the mayor belongs, is split on the mayor’s desperate move.

GNP floor leader Hwang Woo-yea officially said July 15 that the party “will support Oh’s referendum against the universal free meal program and advise citizens to cast ballots in the referendum.”

However, GNP lawmakers showed signs of a split on Aug. 18, when party Supreme Council member Na Kyung-won said, “If we lose the referendum, the GNP could collapse.”

“Whatever the outcome is, the GNP will be in a very difficult position,” said Representative Yoo Seong-min. “It is desirable for the party to keep some distance from the issue.”

In fact, the party doesn’t have a consistent position on free school meals. Kim Moon-soo, a GNP lawmaker and Gyeonggi governor, is now offering free school lunches to all students in his region.

Floor leader Hwang also said at an Aug. 7 briefing that the party would expand free day care to cover all families with children under the age of five, drawing criticism from opposition lawmakers saying his plan contradicts Oh’s in essence.

Park Geun-hye, former GNP chairwoman considered a leading candidate for next year’s presidential election, has kept mum on the issue. She officially told reporters on July 19: “I’m not in the position to express my opinion.”

“Although I oppose to giving lunches to all students, I don’t have much interest in the referendum,” Jang Jeong-ah, 27, a worker in Seoul said. “I think only those who have children will vote on the issue.”

Park Ji-hun, 34, a father of an infant, said, “I definitely support the mayor. The full-scale free lunch program will run riot with the city budget. But I’m still not sure I will have time to vote.”

Kim Geun-hyung, 43, a mother with a child in sixth grade in Banpo-dong, southern Seoul, said she is still mulling whether to vote or not. She is also a teacher at an elementary school in Seoul.

“Basically, I support the mayor’s idea,” Kim said. “Still, I am hesitating over casting my ballot because the vote seems to have become a purely political issue that divides people into two groups.

“Since the city government began offering free meals to all students between first and fourth grades this year, I saw the budget for other school programs, such as hiring assistant teachers for science classes, is reduced,” Kim added. “I don’t think we should spend all the money on meals and reduce other necessary school programs.”