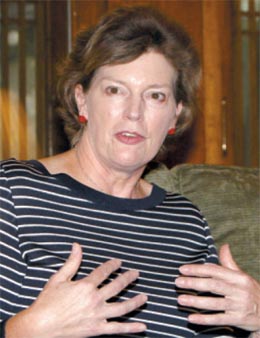 Kathleen Stephens, the U.S. ambassador to Korea, speaks in an interview with the JoongAng Ilbo on Aug. 17 at her residence in Jeong-dong, central Seoul. By Ahn Seong-sik

Hanging on a wall inside the residence of U.S. Ambassador Kathleen Stephens is a reprinted piece of calligraphy. The eight Chinese characters read, “Korea-U.S. friendship, as equals, in mutual cooperation.”

Originally written by Kim Koo, a leading figure in Korea’s independence movement during Japanese colonial rule, the calligraphy best expresses the relationship that Korea and the United States have to pursue, Stephens said.

A small group of reporters recently interviewed Stephens at her residence in Seoul as she awaits the close of her three-year term as ambassador. Sung Kim, named as her predecessor, is waiting for confirmation in the U.S. Senate.

Also known as Shim Eun-kyung, a name she received in the 1970s when she taught English in the Chungcheong region, Stephens has received praise for being the friendliest and most accessible U.S. ambassador to Korea.

She has often been seen on her bike with Koreans as far away as Gangwon and maintaining friendships throughout the country. She also started a blog, sharing her experiences in the country.

She said blogging was an experiment for her but said it paid off.

“I am always surprised by the number of people that come up to me and know the stories that I told on the blog, and that leads to a conversation about something else,” Stephens said. “It’s a kind of great way to make connections with people easily.”

After writing the blog posts in English herself or having someone at the embassy dictate what she says, Stephens said that her posts are then translated into Korean.

Sometimes, it takes quite a bit of time, she said, because she wants the translated words to sound as natural in Korean as possible.

Looking back on her term as ambassador, she said the most gratifying aspect was seeing a country she knew many years ago blossom in so many ways - in terms of democracy, economy and culture.

Representing the United States over the past three years was not always an easy job, though. The two Koreas were brought close to war over the sinking of the Cheonan and the shelling of Yeonpyeong Island last year. A year earlier, the North conducted missile and nuclear tests.

She said those incidents made Washington’s task on the Korean Peninsula even more difficult and more complex, but she said the United States was working to persuade North Korea of another road other than staying on its current path of provocation.

Stephens expressed guarded optimism over the progress being made in Pyongyang-Washington relations, including reunions of families separated by the Korean War and recovering the remains of U.S. nationals in the North.

Food assistance to the North, which the United States is considering resuming, is a long-standing U.S. policy not linked to political or diplomatic goals, the ambassador said, and that the American government is looking at the issue on the basis of need and the monitoring of food distribution.

She welcomed resumed denuclearization talks between the Koreas and between the North and the United States but said much remained to be done.

In particular, she said the North needed to take positive steps to demonstrate its seriousness in returning to the commitments made during the fourth round of the six-party talks in September 2005.

“We would like to see a return to serious commitments implementing those commitments, and we believe the six-party talks remain an important vehicle for doing that,” Stephens said.

Regarding the latest conflict between Korea and Japan over the name of the body of water between the two countries - after the United States triggered outcry in Korea by sticking to the Sea of Japan instead of the East Sea, which is preferred by Koreans - Stephens said it was the U.S. government’s policy to follow the practice of its oceanic agency.

But the ambassador said she understood how Koreans felt about the issue, mentioning the fact that Korea’s national anthem starts with the East Sea.

“We would like to see the question resolved in a way that both our friendly ally Republic of Korea and friendly ally Japan can agree to.”