Chipping in for a good cause

Chipping in for a good cause 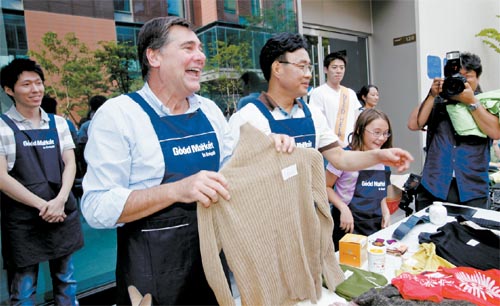 
SONGDO - The 2,625 foot Canal Walk that cuts through the heart of Songdo International Business District in Incheon, is lined by five-story glass buildings on each side. But despite being one of the most modern districts in all of Korea, it is called a ghost town by local residents because the government has failed to meet its target in attracting foreign businesses and vendors to the area.

Lee Jong-cheol, commissioner of the Incheon Free Economic Zone and Stan Gale, chairman of the New Songdo International City Development (NSIC) are trying to change that.

On Saturday, about 6,000 international and Korean residents visited the area for the Good Market in Songdo flea market festival.

“These are from my house. I’m moving soon so I came to sell some stuff,” said Mark Trussell, 39, who was selling Gundam action figures and small ornaments from his home in Hannam-dong, central Seoul. Trussell, a Canadian writer who came to Korea three years ago, said he is leaving the country in October.

A Korean woman approached his stall and asked him how much his set of clay-made ornaments were. After Trussell said they were 10,000 won ($9.25) apiece, she bargained Trussell down to 8,000 won.

Trussell was one of 250 vendors who made the trip to the country’s self-proclaimed “international city” to participate in Good Market in Songdo, a festival organized by the NSIC, the developer of Songdo International Business District.

Both Koreans and expats registered as vendors to sell their used items, which ranged from secondhand clothing to books. Proceeds from items donated to the NSIC were given to Korea Food for the Hungry International (KFHI), a Christian organization established in 1989.

Both Lee and Gale attended the event. “The sight of crowded Songdo that I’m witnessing right now is what I have been dreaming ever since I started the development project of Songdo International Business District,” said Gale, as he announced the opening of the event. “The more you purchase items from this market, the more donations will be made to the people in need.”

Although the vendors began selling their goods at 3 p.m., hundreds of visitors arrived at Canal Walk hours before to get first dibs on the products.

“[In] Korea, it’s so easy to engage in impulse shopping. I buy clothes I end up never wearing,” said Nadia Junaid, 34, a Canadian woman who brought all her unused clothes to sell. Junaid lived near Canal Walk in 2010. “[When I first came here], it was dead. It was full of construction and there weren’t any buses or nice parks. So it’s surprising for me to witness such a crowd today,” she said.

At the Good Auction, 13 items donated by celebrities, entrepreneurs and Incheon City Mayor Song Young-gil were auctioned off.

First on the block was Song’s bamboo folding fan, made to commemorate the return of the Uigwe, a collection of royal Joseon Dynasty protocols returned to Korea in June from France. The starting price was 50,000 won and it was eventually auctioned off for 100,000 won.

An oil painting that was donated by Park Young-bok, chairman of Kyung In Newspaper’s Incheon headquarters, was auctioned off for 450,000 won from a starting price of 200,000 after a fierce competition among two middle-aged Korean men.

Two fathers of teenage boys competed for a pair of soccer shoes and a ball, autographed by Incheon United FC coach Huh Jung-moo. After starting at 70,000 won, the two fathers brought the final price to 110,000 won.

The auction raised about 3.5 million won. The day-long event itself raised 5.7 million won from donations, charity booths and the auction.

“I’m so pleased with the turnout,” Gale said. “I’m also happy because people are enjoying. But also because [this event] is for a great cause.”

Gale said that Good Market in Songdo will be a monthly occurrence. “This is the first one and we are experimenting. Next month’s one would be bigger.”

According to Gale, the event was organized to “allow people to come down and see the area.”

“I want them to come down and have an experience. And each time we hold such event, we’ll be able to open up Songdo to more people,” he said.

The city was designed from its founding to become environmentally sustainable, and Gale explained that is why his team organized a Green Zone, where they sell environmentally-friendly goods to encourage environmental awareness.

“I believe 2012 will be the first year of operation [of Songdo]. We want it to be the city of opportunity where jobs are created for the educated Korean people. They can work for international companies in their home countries and have international experience,” said Gale, but added that Koreans must “welcome foreign companies” in order to achieve that goal.