Taking a knowledge of Korea home

Taking a knowledge of Korea home 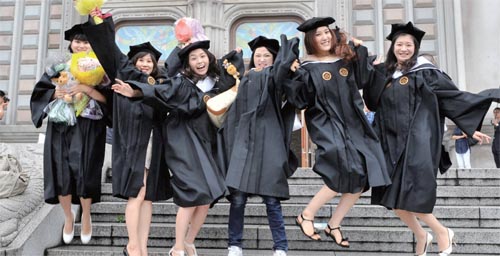 Foreign graduate students who majored in Korean Language and Literature celebrate during their graduation ceremony at Kyunghee University on Aug. 17. Among them, Xu Zhengying, third from left, and Jin Yu, right. [NEWSIS]


International students drawn to Korea by its pop culture are becoming unofficial diplomatic envoys for the country when they finish their studies here and return home.

According to Kyunghee University in Seoul, a total of 43 international students have earned masters degrees in Korean Language and Literature since 2008. On their return home, they took a range of jobs, although many either teach Korean or work in businesses related to Korean companies.

Kyunghee says that achieving a high level of proficiency in Korean is becoming more popular among students from other Asian countries, such as China, because the graduate programs in Korea offer professional licenses for teaching Korean to foreigners.

Xu Zhengying, 25, was impressed with the Korean drama “Winter Sonata,” which was released in 2002 and became popular throughout Asia, especially in Japan and China. She became intrigued with Korea and decided to study its language in her college. She studied basic sentence structure, grammar and reading comprehension for two years. However, the level of instruction didn’t satisfy her because most of her teachers weren’t native Koreans. She felt she wanted to experience Korea first hand.

She entered Kyunghee University’s Department of Korean and Korean Literature in 2009 and has been studying since then. For Xu, the courses on Korean poetry were the most satisfying. She said the “Flower Jindallae,” (Azalea) written by Kim So-weol in 1925, is her favorite poem.

“I thought it would be easy to learn in the beginning because Korean poems are not that long,” Xu said. “But I was wrong because although their sentences are short, many of the words have multiple meanings. And I could figure out that many poems that were written in the early 20th century reflect Koreans’ sadness during the colonial period.” After becoming intrigued by classical Korean poetry, she became aware of passages or poems posted in subways and even in public bathrooms.

Xu said she understood Korea better when lectures gave the historical background to the poems she studied.

“After learning about Korean history, I felt I was capable of explaining Korean history in the language, which means I’ll be able to work as a Korean language teacher in my country,” Xu said.

When foreign students earn a degree from a Korean Language Department, they receive a license to teach Korean to foreigners.

“I’m proud to be able to deliver an education to people in my country because it feels like I’m contributing to introducing a country I like,” Xu said.

“Although I won’t teach Korean in my country, I think I can take part in international business between the two countries and I’m very positive that I could bring more to the job than other people in China,” Yu said “It’s not only because I speak Korean, but I understand Koreans better, including their history and culture, which I’ve learned in school. I think these things are important in international trade because they help you understand your partners better.”

Yu said studying about Korea is becoming more popular as the fervor abroad for Korean cultural content, such as dramas and movies, grows. She said more than 30 students are majoring in Korean at her college in China, compared to 50 to 60 students in traditional majors like engineering.

“The popularity of studying Korean is growing every year,” Kim Min-hee, a public relations officer at Kyunghee University, said. “We have about 43 graduates with masters degrees and they are working in jobs that use the Korean language, such as education, international business and government agencies.”