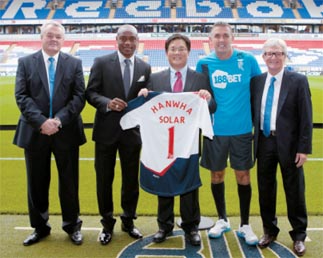 Hanwha Group has signed a sponsorship agreement with the English Premier League’s Bolton Wanderers Football Club for the 2011-2012.

Bolton Wanderers FC is already widely known among football fans in Korea as Korean footballer Lee Chung-yong is an important member of the squad.

It was a big issue when Hanwha recently signed a similar agreement with Hamburger Sport-Verein. The company now plans to spread Hanwha Solar’s brand image throughout Germany and the U.K.

The company believes that the recent agreements with Bolton Wanderers FC and Hamburger Sport-Verein have set the stage for the solar energy business in Europe.

According to the terms of the agreement, which includes full marketing rights, Hanwha will display Hanwha Solar’s brand images on the various electronic boards at the club’s home matches. There will be other promotional events too.

This agreement is expected to generate an incredible level of synergy, with Hanwha being a leading solar energy company and Bolton Wanderers FC being one of the most environmentally-friendly football clubs.

Hanwha Solar executive Lee Sung-soo said, “It is a great opportunity to introduce Hanwha Solar into the European market through football, the U.K.’s most popular sport. We will continue to support and develop Hanwha Solar so it can become the world’s No. 1 company in the solar energy sector.”