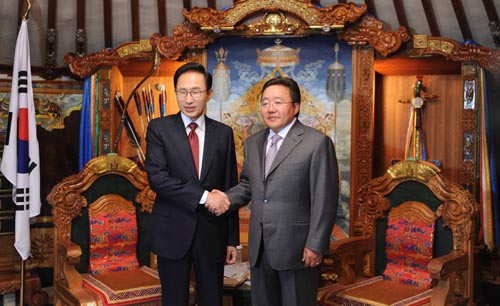 
ULAN BATOR, Mongolia - Leaders of Korea and Mongolia agreed Monday to significantly boost cooperation on energy and other resources and to elevate their relations to a “comprehensive partnership” in a symbolic commitment to bolster ties in all areas, officials said.

Lee arrived in the Mongolian capital on Sunday for a three-day state visit as part of a three-nation tour of Central Asia, a region that is rich in resources and business opportunities and carries strategic significance as a bridge between Asia and Europe.

Lee is scheduled to visit Uzbekistan and Kazakhstan later this week.

“The two leaders agreed to expand and develop cooperative relations in all areas in accordance with the principle of a comprehensive partnership after sharing an understanding that deepening and moving their relations forward would play a key role in cooperation and prosperity not only in the Republic of Korea and Mongolia, but also in the region,” the statement said.

Under the agreement, the two sides agreed to hold high-level talks more often and have their foreign ministers meet every year to discuss bilateral relations and other issues of mutual interest, the statement said.

The statement also said that the two countries agreed to expand defense cooperation.

The “action plan” called for expanding Korea’s investment in Mongolia’s infrastructure and construction sectors, including Korean firms’ participation in a project to build 100,000 apartment units.

Elbegdorj expressed gratitude for Korea’s support for its efforts to strengthen democracy and national development, and Lee agreed to continue to help Mongolia bolster democracy and develop a market economy, the statement said.

They also agreed to expand air routes and simplify the visa process to increase people-to-people exchanges.

On security issues, Mongolia welcomed last month’s talks between the nuclear envoys of South and North Korea and expressed support for Seoul’s efforts to resolve the nuclear standoff and resume inter-Korean dialogue.

The two sides also expressed concern over Pyongyang’s uranium enrichment program and agreed that a complete, verifiable and irreversible denuclearization of North Korea is significant for peace and stability in the region and the international nonproliferation regime, the statement said.