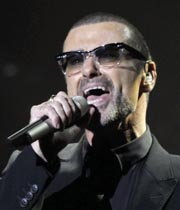 PRAGUE - George Michael made an emotional and introspective return to the stage on Monday, admitting midperformance that he has split with long-term partner Kenny Goss while also recalling his own troubled past with drugs.

The 48-year-old singer - appearing at the Prague State Opera House on the opening night of his “Symphonica” tour - told the audience: “Kenny and I haven’t been together for two and a half years ... It’s time to be honest.”

The former Wham! singer had previously denied allegations he and Goss had separated.

“My love life has been a lot more turbulent than I’ve let on,” he said, dedicating a new song “Where I Hope You Are” to Goss.

“This man has brought me a lot of joy and a lot of pain,” he said, his voice breaking up, referring to Goss’ alcohol addiction following the death of his parents as well as his own drug habit which landed him in jail last year.

Michael has scheduled 195 concerts in Europe.

He paid tribute to the late Amy Winehouse on Monday, calling her the only British artist to have left him in awe during his career.

“The thought that we won’t hear any more of her music is too sad for words,” he said before performing a version of Winehouse’s hit “Love is a Losing Game.”