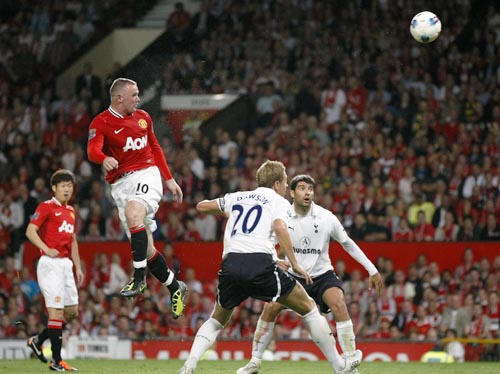 
MANCHESTER, England - Striker Danny Welbeck scored one goal and created another to inspire a youthful Manchester United team to a 3-0 win over Tottenham Hotspur in an entertaining Premier League match at Old Trafford on Monday.

Any doubts about manager Alex Ferguson’s decision to field a starting lineup with an average age of just 23 were dispelled just after an hour when 20-year-old striker Welbeck headed in a pinpoint cross from 22-year-old midfielder Tom Cleverley.

Welbeck’s superb backheel set up Anderson’s sweet strike in the 76th minute and Wayne Rooney added the third with a late header as the champions continued the fantastic home form that propelled them to the title last season.

“The second half we just took off,” Ferguson told Sky Sports. “It tells you we still believe in young players .?.?. more so when you see the ability they’ve got.”

United, who dropped only two points at Old Trafford on the way to a record 19th league title, maintained their perfect start after last week’s win at West Bromwich Albion. Manchester City lead them on goal difference at the top of the fledgling table.

Ferguson kept faith with the youngsters who served notice in the Community Shield season curtain-raiser that they would be keeping the more established players on their toes.

They did not let him down as they game set off at a fast tempo with Cleverley sending Spurs keeper Brad Friedel, almost twice the age of some United players, diving at full stretch to keep out his eighth-minute strike.

Tottenham had their own chances but lacked the spark of Luka Modric who had been left out of the team with manager Harry Redknapp saying the Croat’s head was “not in the right place” amid speculation he could be leaving the club.

The deadlock was broken in the 61st minute when defender Chris Smalling, another of the new generation at the age of 21, laid the ball back for Cleverley who whipped in a cross that Welbeck sent powering into the bottom left corner.

Bursting with confidence, Welbeck then attempted an overhead kick that landed in the hands of Friedel, while indefatigable Rooney - something of an old hand at 25 - went close with a free kick that Friedel did well to tip round the post.

Welbeck, back at United after a loan spell at Sunderland last season, set up the second goal with a cheeky backheel to an unmarked Anderson, who sent the ball flying into the net after a move that started at the other end of the pitch.

The third goal owed everything to United’s old timers with substitute Ryan Giggs unleashing a right-footed cross that Rooney headed goalward off the top of his new hair transplant three minutes from time.

Meanwhile, another veteran midfielder, Park Ji-sung, 30, came on as a sub in the 81st minute.

The Korean, who signed a new two-year contract to stay with United until 2013, had a shot in the 89th minute.