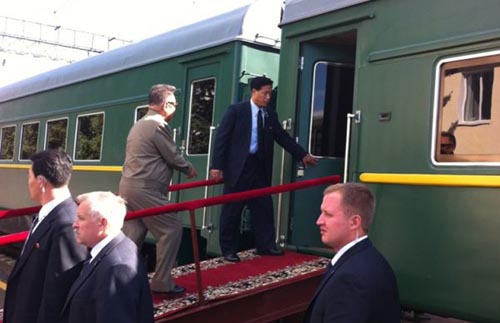 Kim Jong-il uses a ramp to board his armored train after visiting a hydroelectric power plant on Sunday in Novobureyskaya, Amur, Russia. [YONHAP]


North Korean leader Kim Jong-il reportedly arrived in Ulan-Ude early yesterday, an eastern Siberian city in the Buryatiya region where he is expected to meet with Russian President Dmitri Medvedev later this week.

Officials in Seoul said the summit would likely be held today.

An armored train carrying Kim arrived at Ulan-Ude’s train station at 9 a.m. local time, where Kim was welcomed by Vyacheslav Nagovicin, the president of Buryatiya, Yonhap News Agency reported. Ulan-Ude, the capital of the Russian republic of Buryatiya, is located about 5,500 kilometers (3,450 miles) east of Moscow.

Yonhap reported that Kim headed into downtown in his Mercedes sedan escorted by police after a 20-minute reception. Russian media said Kim appeared to be headed to a resort near Lake Baikal, roughly 100 kilometers to the west, speculating that he would spend the day around the lake, apart from some tours of major industrial sites in the city.

Kim traveled around 3,000 kilometers on the Trans-Siberian Railway to Ulan-Ude from Khasan, the Russian border town where he arrived from North Korea on Saturday.

He made a few stops in between, including in Amur on Sunday to visit a hydroelectric power plant and its 139-meter (456-foot) dam on the Bureya River, the North’s state-run Korean Central News Agency reported.

“Inexhaustible is the strength of the Russian people,” Kim was reported to write in the visitor’s book after touring the plant.

Kim is also believed to have visited Skovorodino, another city in Amur, to see a pipeline that sends crude oil to China, but the visit has yet to be confirmed.

Kim’s visit to Russia, his first since 2002, comes as Pyongyang has shown greater interest in political and economic deals with other countries, seemingly spurred by its worsening economic woes and the approaching deadline for meeting its goal to become “a strong and prosperous nation” by next year.

The resumption of the six-party talks on the North’s denuclearization, through which North Korea seeks economic aid, is a possible topic on the agenda for the Kim-Medvedev meeting, as is a trilateral energy deal that would allow Russia to sell natural gas to South Korea through a pipeline running through the North.

Kim has been observed using a makeshift ramp when getting off his train, limping on his left leg, raising speculation that his health may not be improving as much as recently thought, according to a Seoul official.

Kim, 69, suffered a stroke in 2008 and is in the process of transferring power to his third son, Kim Jong-un. The North’s media reported that Kim Jong-un was not accompanying his father on the trip to Russia.