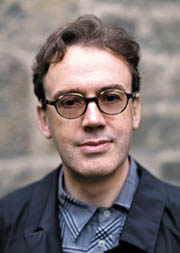 Jonathan Mills, director of the Edinburgh Festival Provided by the festival

EDINBURGH - Under the direction of Jonathan Mills, an Australian composer turned performance curator who has led the festival since 2006, this year’s Edinburgh International Festival highlights the connections between Europe and Asia with a program featuring artists from Korea, China, Japan, India, Indonesia and Vietnam.

During the festival’s opening days, Mills talked with the Korea JoongAng Daily about his philosophy for this year’s festival and what to expect from the invited artists from Korea.


Q. You worked out an agreement with Oh Tae-suk three years ago for the creation of “The Tempest.” You’ve also invited three other Asian groups to present Shakespearean works, including “King Lear” by Wu Hsing-kuo of China’s Contemporary Legend Theatre and “The Revenge of Prince Zi Dan” by Shanghai Peking Opera Troupe, which is based on “Hamlet.” Why were you interested in having Asian companies present works by Shakespeare?

What do you expect Eun-me Ahn Company to bring to the festival?

I think “Princess Bari” is an exceptionally interesting dance. It’s not something you can easily define and I think of it as dance theater in a way. If master Oh’s work is more restrained and classical, Ahn’s is an explosion of madness and exuberance. Also, I always think that she has the ability to talk with different audiences. There is a genuine narrative strength in her work. It’s also a dance and a theater for the generation who is interested in DJs, nightclubs and different forms of social interaction. I think it is wild in that sense.

You must have heard about her when she performed the piece in Europe.

I knew [the company had performed in Europe], but normally I don’t have any sentiment over any performance until I see it. There is no point listening to what people say about these works, until I’m [at the theater] to look.

I understand that Oh’s play and Ahn’s dance bring some cultural diversity to the festival, but what about the Seoul Philharmonic Orchestra? What do you expect them to bring?

I wanted to have Asian musicians build a different atmosphere by playing Western music. An orchestra is not a fixed item. Just as every composer who writes for an orchestra brings his or her own personality, each and every orchestra member brings their own cultural background to the orchestra and makes it evolve. Seoul Phil also play with a different attitude and different sound with different strings and winds.

The theme for this year’s festival is “West meets East.” When did you decide on that?

About five or six years ago. [When I took this position], I wanted to present a cycle of festivals. I wanted to start in Europe and end in Asia. Mainly because I wanted to suggest that international festivals should not just be about cultures close to us, but cultures a long way away. The International Festival is a bridge from things that are not known to be commonplace. It might be commonplace for [Asians], but it’s not commonplace for people in Europe. And I believe people can appreciate listening to music, looking at dances and theater because there is a sense of shared humanity behind it. While they do that, they can also learn and acknowledge if the performances were by Korean, Chinese or Indian artists or others. It’s about that subtlety in between performances and a universal quality, which become the important components to the texture of the International Festival.

Does that mean that you are going to include more Asian groups in future festivals?

I’m not going to say what we are going to do next year, because there is going to be a different theme. But each year, I try to describe the thing I think is very relevant to the arts, also very relevant to the way of showing through the arts so that people can be informed that we are linked as one world. It has its challenges and its disadvantages but it’s inevitable and undeniable.

How do you choose the groups you invite to the festival each year?

It’s a combination of a very practical dimension and a very poetic dimension. I need to be realistic about the budget and have to have a series of conversations with each group, and then I have to think about which performances would look great in the theaters here, just as Ahn’s “Princess Bari” looks fantastic in the Playhouse in Edinburgh.

Then isn’t the festival greatly affected by your personal taste?

Of course, I don’t put anything in there that I don’t like, but at the same time, I choose because there are things that are noble and new. I’m trying to find strategies in making choices for the general public, and those choices are representing and implementing what I believe are the social economics and artistic contexts of the International Festival in Edinburgh. I think people trust the festival in trying new things out, based on the 65 years of history of the festival.