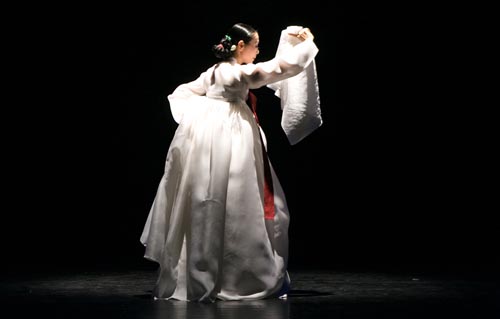 In “Dance with the Flavor,” four stalwart dancers of the National Dance Company of Korea will present a variety of creative works based on traditional Korean dances today and on Friday at the National Theater of Korea in central Seoul. See TRADITIONAL PERFORMANCE. Provided by NTOK

Today: This concert commemorates 19 years of diplomatic ties between Korea and China.

Chinese pianist Chen Yunjie, who won the Chinese National Piano Competition at the age of 12, will appear with Korean cellist Chung Myung-wha.

The program consists of “Los Requiebros from Goyescas” by Enrique Granados, Hungarian Rhapsody No. 10 in E by F. Liszt, Sonata for Cello and Piano No. 2 in F, Op. 99 by Brahms and Piano Sonata No. 8 in B flat, Op. 84 by Prokofiev.

Friday: Kicking off their East Asia tour, Spankers will do a DJ set and a live music set in Hongdae.

Best known for their singles “Sex on the Beach” and “Chupa rico,” Spankers (a duo consisting of DJ Paolo Ortelli and vocalist John Biancale) are already the talk of the town among clubbers and electronica fans worldwide.

This weekend’s gig will include their newest single, “Everyone’s a DJ,” released in early August.

Friday and Saturday: French jazz outfit the Remi Panossian Trio is back for another performance in Korea. The three friends - Remi Panossian on piano, Maxime Delporte on double bass and Frederic Petitprez on drums - whose popularity here continues to soar among local jazz fans, will play songs from their latest album “Add Fiction.”


JANG KI-HA AND THE FACES

A stage near 88 Lake in Olympic Park

Friday to Sunday: Korean indie rock band Jang Ki-ha and the Faces are having an encore concert following their sold-out concert in June. Both concerts celebrate the release in June of the band’s second album, “Just Another Relationship.” Both will highlight Jang’s playful lyrics and at times whimsical songs, strongly inflected with his laid-back personality.

Friday to Sunday: 2NE1, one of the country’s most popular K-pop bands, will give its first concert since its debut in 2009. The concert will feature their digital single, “Lollipop,” and other hit songs such as “I Don’t Care,” “Can’t Nobody” and the more recent “I Am the Best.”

The program includes Beethoven’s Symphony No. 9 in D minor “Choral” and Tchaikovsky’s Piano Concerto No. 1 in B flat minor, Op. 23.

Wednesday: Sponsored by the Kyunghyang Shinmun, this concert was planned to celebrate the 60th anniversary of the Ewha & Kyunghyang Concours Concert, which has served as a stepping stone for many famous classical musicians in the country. Past winners will appear to perform and the program includes Beethoven’s Egmont Overture Op. 84, Mozart’s Sonata for Two Pianos in D, K. 448, Dvorak’s “New World Symphony,” and Popper’s Hungarian Rhapsody Op. 68.

Sept. 1: The Debussy Special, the third part of the Chamber Music Society of Kumho Art Hall’s 2011 Season, is dedicated to the French composer’s early works, including his only piano trio and his last work, Violin Sonata L.140.

Sept. 3: Liam Gallagher, former frontman of the English rock-band Oasis, is back with his new band, comprised of former Oasis members Gem Archer, Andy Bell and Chris Sharrock. The members of Beady Eye, whose last visit to Korea as part of Oasis was in 2009, will perform songs from their newest album, “Different Gear, Still Speeding.” The album contains songs with a stronger, more retro style, signaling a new start for the group.

Sunday to Oct. 9: “Rent” is a musical based on Giacomo Puccini’s opera “La Boheme.” It concerns a group of impoverished young artists and musicians as they struggle to make it in New York’s Lower East Side, in bohemian Manhattan, as they deal with issues such as HIV. The production won a Tony Award for best musical and much critical acclaim upon its premiere.

To Sept. 4: “Spring Awakening” is an alternative rock musical set in late 19th-century Germany. The rites-of-passage plot focusses on teenagers who are in the process of discovering their sexual longings.

DiPietro has been involved in the creation of several critically acclaimed musicals, including the Tony Award-winning musical “Memphis,” “All Shook Up” and “The Toxic Avenger.”

The first section shows dances derived from Buddhist ceremonies, such as the butterfly and cymbal dances, as well as the salpurichum, a solo dance that involves waving long white strip of cloth to vent one’s spite, and the seungmu, a dance performed by Buddhist monks that dresses the dancer in a hooded gown with long white sleeves. Another section will focus on percussion instruments.

Saturday and Sunday: Now in its second year, the Gwangju World Music Festival invites foreign artists to perform in Korea and provides local artists with the opportunity to collaborate with them.


*Event information is summarized from the Korea Tourism Organization and other sources.