Decca makes up for lost time by releasing Beatle’s ballet

Decca makes up for lost time by releasing Beatle’s ballet 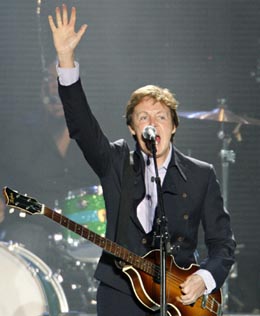 LONDON - Decca has teamed up with Paul McCartney to release his upcoming ballet nearly 50 years after the record label famously rejected taking on the Beatles in what has been called one of the music industry’s biggest blunders.

The ballet, “Ocean’s Kingdom,” is the former Beatle’s first foray into the world of dance, and has its world premiere at the New York City Ballet on Sept. 22. There will be four additional performances in September and five more in January. The Decca recording hits the shelves in Britain on Oct. 3.

Decca famously snubbed the Fab Four early in 1962, reportedly saying at the time that “guitar groups are on the way out” and “the Beatles have no future in show business.”

“Ocean’s Kingdom,” commissioned by the New York City Ballet, is conducted by John Wilson and performed by the London Classical Orchestra.

When he decided to write a ballet, McCartney visited the Royal Opera House in London and saw “Giselle,” meeting the dancers of the Royal Ballet afterward to discuss the work.

McCartney’s ballet tells of a love story set in an underwater world where people are threatened by humans. The score lasts an hour and is divided into four movements - Ocean’s Kingdom, Hall of Dance, Imprisonment and Moonrise.

In a statement, the 69-year-old singer/songwriter said he was “trying to write something that expressed an emotion - so you have fear, love, anger, sadness.”