Gochujang: It’s rice, but not as you know it

Gochujang: It’s rice, but not as you know it 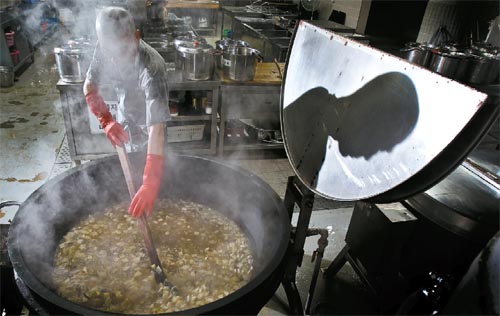 Monk Shimwoo stirs a pot of soup inside the kitchen of Haein Temple.


The following is an account by monk Shimwoo, in his own words, of the history of temple food at Haein Temple. He explains how the kitchens operated before gas boilers were installed in 1987, when the monks had to rely on wood fires, and how discipline was even stricter then than it is now.


The kitchen in Haein Temple has now been modernized, but before 1987 we still used wood fire stoves and iron cauldrons.

For junior students who were yet to become monks, their duties often involved menial chores and cooking in the kitchen. Their daily work was supervised on a much stricter basis than it is now. Back then, if you were placed in the kitchen to, for example, make the rice, you would have to do that for an entire year.

This rigorous kitchen work was a way of testing their willpower. The time they spent in the kitchen was a time for them to ask themselves if this was the way they wanted to live their lives. Back during that period, when a military government ruled the country, there were many people who came here to become monks. We used to welcome around 10 people every day. But after experiencing how hard the kitchen work was, most of them left. 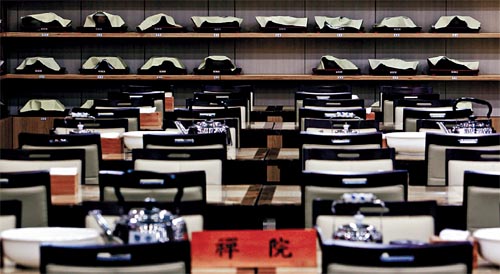 A traditional Buddhist meal setting with four bowls per head at the temple’s main dining hall.


When I think back to that time, a time when we didn’t have gas boilers inside the kitchen, there were many comic episodes that occurred. In the temple’s kitchen, we had a tradition of making rice for 500 people in just five minutes - which was very taxing for the junior monks.

When I was in that role, I also had to do this. To make steamed rice for 500 people, you need 25 doe (a Korean unit of measurement that is equal to around 1.8 liters) of rice, or around 50 kg in weight. As soon as the person in charge of the fire finished lighting up the charcoal, the monk in charge of the rice would have to pour all the rice into the boiling hot water as quickly as possible and then close the cauldron lid.

While the rice was cooking, the junior monk would have to stand next to the iron caldron in case anything went wrong. Because the caldron was steaming hot, anyone who stood next to it would soon be drenched in sweat. There were many times when junior monks collapsed due to all the heat as they were standing next to the giant cauldron.

Then, after four minutes and 55 seconds, the monk in charge of the whole operation would yell out “put the fire out!” The timing is very important, as steamed rice can taste totally different even if you get the cooking time wrong by as little as 1/100th of a second.

When you are making rice for 500 people, there is bound to be a lot of nurungji (crust of overcooked rice left on the bottom of the pot). The amount of nurungji that we stored for a year was huge. We would put it in a separate wooden rice chest and use it to make gochujang.

So, on the day we made gochujang at the temple, the monks would take the nurungji to the nearest rice mill and grind it. Then we would mix red pepper flakes, ground nurungji powder and starch syrup to make gochujang. The gochujang we made from nurungji was so nutty and delicious. It has to be tasted to be believed.