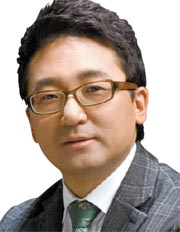 “The morale of Korea’s software talent has never been lower,” lamented Daniel Lee, the CEO of Inspirit, a maker of software for mobile communications networks, in an interview with the JoongAng Ilbo.

“The importance of software is growing day by day, but if things don’t change, Korea’s software industry has no future,” the 41-year-old said.

Inspirit is young and small, but it knows one or two things about software and its importance.

The company was launched in 2000 and has only 200 employees. Despite being a relatively small enterprise, it has an impressive portfolio of 160 technology-related patents. Seventy percent of its employees are in research and development.

Lee graduated from the electrical engineering department at Hongik University in Seoul. He joined Samsung Electronics, a position highly-sought after by college graduates, but left the company four years later to set up his own company.

Sadly, he said little has changed for Korea’s chronically underappreciated software talent in the last decade. In particular, he condemns how some of the country’s top software talent is flocking to smartphone app development for better money. “App development is very simple and the lowest form of software development,” Lee said. Such a phenomenon, he warned, will backfire and drive down Korea’s software competitiveness.

Lee is also the CEO of Enspert, a manufacturer of media convergence devices. In fact, Enspert was the first company in Korea to release a tablet PC. It introduced the Identity Tab last September, about two months ahead of the local launch of similar products by Samsung and Apple.

Inspirit has been developing Android-related technologies since 2009.

Back then, observers say Android, Google’s mobile software platform, was full of glitches. But things improved as hardware companies such as Samsung and Motorola and software companies took part in the platform’s development. Inspirit was among them. In February, Inspirit filed a lawsuit against HTC, claiming that the Taiwanese company, the world’s fifth-largest smartphone manufacturer, infringed on a technology patent related to the stand-by screen control and management functions of smartphones. “We have a high chance of winning as we not only possess that specific patent, but also 20 other patents that are relevant in the case,” Lee said, adding that the company is preparing to file another lawsuit against a global mobile phone manufacturer.

Patent battles are flaring up in the global technology world. “Global IT giants are trying to secure dominance as the technology paradigm shifts,” said Lee, adding that the fight will only get fiercer in coming years.

“It’s just starting. We will be seeing many more mergers and acquisitions between hardware and software companies, as well as alliances of a very different form.”