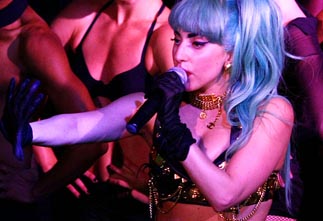 China has banned Web sites from featuring 100 songs by artists from Lady Gaga to the Backstreet Boys, a statement on the culture ministry’s Web site said.

The ministry said it aimed to regulate the “order” of the Internet music market, adding songs that “harm the security of state culture must be cleaned up and regulated under the law.”

The notice, issued on Aug. 19 and posted on the ministry’s Web site, included American singer Lady Gaga’s “The Edge of Glory,” “Hair,” “Marry the Night” and “Bloody Mary.”

It did not explain why the songs were banned, but China routinely censors anything it considers politically sensitive or offensive.

While “Bloody Mary” ends with the line “Oh, liberdade, mi amor [Oh, freedom, my love],” “Hair” includes the lyrics “This is my prayer/ That I’ll die living just as free as my hair.”

Boy-band the Backstreet Boys, American R&B singer Beyonce, Canada’s Simple Plan and British pop group Take That all had songs on the list - the third to be issued by China’s government.

Asian artists with songs banned included Taiwan’s Chang Hui-mei, who previously ran foul of the Beijing government after singing the Taiwan anthem at the inauguration of former Taiwanese President Chen Shui-bian in 2000.

China, which regards Taiwan as part of its territory, temporarily banned her from mainland performances and pulled her product advertisements.

Authorities have reportedly blocked some foreign bands from performing live in China, or scrutinized set lists in advance to nix songs considered offensive.

The official squeamishness over headline foreign performances was heightened when Iceland’s Bjork closed a 2008 Shanghai show by shouting “Tibet!” at the end of her song, “Declare Independence.”

Since 2010, China has required all songs posted on music Web sites to receive prior approval, in a move the government said was partly aimed at rampant piracy.