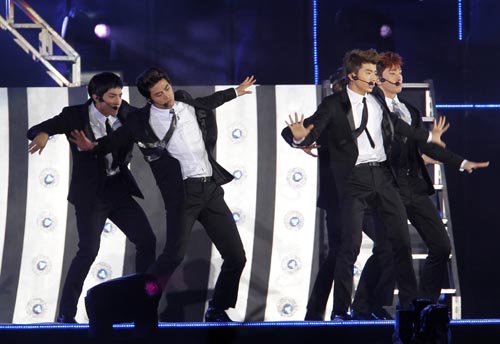 The K-pop group 2PM performs its latest single “Hands Up.” The song is one of 24 that the Ministry of Gender Equality and Family banned this month for listeners 18 and under because the songs contain lyrics that refer to alcohol. [JoongAng Ilbo]


Beginning this month, young Koreans will be banned from listening to pop songs with lyrics such as “I drank soju last night” or “smoke up.”

That might seem like an impossibility in a cosmopolitan city that has gotten rid of many of the restrictive censorship laws that characterized the authoritarian era. But this month the Juvenile Protection Committee under the Ministry of Gender Equality and Family released a list of 24 songs designated as “harmful for teenagers.”

The list not only includes current hits such as “Hands Up” by 2PM, “Americano” by 10cm and “Please Accept Me” by indie band Jang Ki-ha and The Faces, but also “Truth Revealed by Drunkenness,” a song released 15 years ago by the now-defunct duo Jeollamhoe.

This is not the first list of songs the ministry has released. In the first eight months of the year, the ministry released a list of 169 songs it deemed “harmful,” a figure that is almost triple the tally for the same period last year.

When asked the reason for such a drastic increase, a spokesman with the committee said, “While we are seeing a decreasing number of songs with violent and sexual lyrics, there are more and more songs that mention alcohol and tobacco.”

The committee, established in 2006, consists of nine experts including music critics, TV and radio station producers and songwriters. The group meets once or twice a month to review whether songs contain maleficent elements and decides whether the songs should be added to the “harmful” list, as well as overseeing a rating system for music.

Under the rating system, there are two categories for music sales: people under 19 and people 19 and over. Also, an album with a song on the list must carry a sticker saying that it cannot be purchased by anyone under 19.

The Korean Film Rating Board oversees ratings for films, DVDs and television, for which there are more subdivisions for age: all (suitable for everyone); children 12 and older; children 15 and older; and adults 18 and older. TV shows are rated in similar categories.

“Words such as ‘alcohol’ and ‘cigarette’ may not be harmful to high school students,” said Lee Young-hee, a member of the committee. “But because the restriction for those under 19 also includes preschool children we have no choice but to apply stricter standards [for albums].”

He also noted that the government should further divide the age classifications for music.

Since its introduction five years ago, the rating system and accompanying restrictions have faced strong resistance from music fans nationwide.

Following the release of the new banned songs list, a large number of Internet users started posting messages on the ministry’s Web site saying that the policy infringes on listeners’ freedom of expression.

“I urge the ministry to review traditional and contemporary Korean literary works again,” said a netizen named Na Hyun-soo. “A countless number of works in Korean literature texts refer to alcohol and cigarettes.”

Lee Jae-wan, another netizen, posted a sarcastic message on Tuesday asking the ministry to put restrictions on references to rainy days, because rainy days “make me want to drink.”

On that day, the ministry announced it was working on “more detailed standards for reviewing albums in order to improve the system,” and said it would review the banned songs list in January 2012 to decide whether to keep or remove certain songs on the list.

But the comment further angered netizens, who paralyzed the ministry Web site with messages yesterday. From 11:30 a.m. until 1 p.m., the site had a notice saying, “The Web site will be closed for system repair.” At 2 p.m., the site said the “connection is being hampered by an excessive number of visitors.”

K-pop music critics have proposed that albums be regulated by an independent body. In Japan and the United States, civic groups are in charge of reviewing albums.

“A government-led review of albums could have consistency issues,” said Im Zin-mo, a pop music critic.